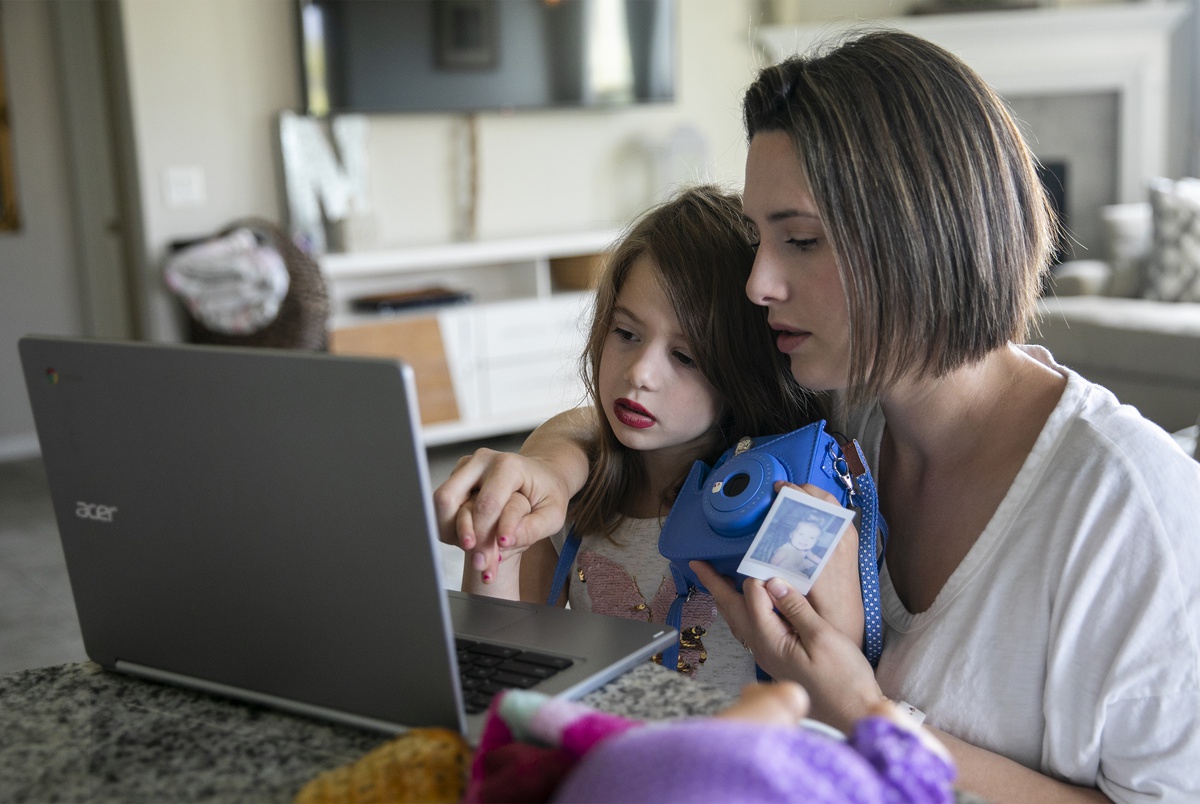 Sign up for The Brief, our daily newsletter that keeps readers up to speed on the most essential Texas news.

Since March, Melissa and her husband have gutted their savings, spending more than $5,000 caring for their three children. Most of the money has gone to child care and speech therapy for their daughter Nora. Two weeks ago, the couple put their house up for sale.

Five-year-old Nora is on the autism spectrum and has attention deficit hyperactivity disorder, her mother says. Before the coronavirus pandemic, Nora attended school full time in the Katy Independent School District and had access to a suite of behavioral therapists, speech therapists and special education teachers. But that resource lifeline has been cut for nearly six months, and her parents have only been able to afford select specialists since.

She’s at an age when special education intervention and socializing with other kids are crucial. Without them, she could lose out on building key skills — like learning how to intuitively communicate with others — that she may never pick back up. It only takes two weeks without school for Nora to regress. Since schools closed, Melissa has noticed it’s harder for her daughter to pick up on social cues, like when someone speaks to her and it doesn’t click that she has to respond.

“She’s starting to become more self-aware of other kids not liking her, so she’s not even willing to practice those skills anymore, so that’s a little heartbreaking,” said Melissa, who asked that the family’s last name not be used to protect their privacy. “I don’t know if she’ll become more reclusive because of that or if she’ll be able to pick that back up.”

Nearly 10% of Texas public school students — about half a million — receive special education services through their schools, which offer help with a wide range of behavioral, emotional and physical challenges.

When schools shuttered in the spring, many families were left to manage their children’s learning and seek out special services, like therapy, on their own. Educators, many new to remote teaching themselves, struggled to adapt students’ individual learning plans to a virtual world.

For students with more intensive needs, both cognitive and physical, being at home without access to the many professionals they work with is an “incredible burden to put on parents,” said Lindsay Jones, chief executive officer of the National Center for Learning Disabilities. Families don’t have the training to provide the support their children need, she said. Districts need to provide ways to get parents those services online and in “unique and creative ways.”

The online classes offered during the initial months of the pandemic largely did not serve the needs of students with disabilities, parents and educators say. Some classes were prerecorded, and curriculum was more text- and reading-heavy than traditional schooling, putting students who struggle with reading at a disadvantage. Special education students were often left stranded in front of screens. Experts say it’s important to get special education students who have trouble with online learning adapted resources, and some need to be back in classrooms.

As the new school year begins, districts are pushing to do that as quickly as possible, knowing that valuable ground is lost as time slips away.

Pandemic-era school this fall will almost surely be better executed than in the spring, educators say, but with many school buildings still closed, some parents aren’t confident that the education offered to their children will be enough. Some students will struggle to recoup lost progress and move forward in their learning, which could have long-lasting effects.

The health risks of in-person learning for students who may already have physical vulnerabilities has left may families torn. Some would prefer that their children continue learning virtually. Other parents are pushing to reopen in-person classrooms, fearing that without them, their kids will stagnate and regress, cut off from access to crucial resources.

Nora’s teachers from the Katy school district are doing the best they can, her mother said. They’ve uploaded videos on YouTube, created new lesson plans for online learning and checked in on the family via phone and text, though much of that hasn’t been done since early May. What Melissa really wants is for Nora to go back to school.

“The [skills] I worry about the most are probably her socialization because I don’t want her to be lonely in life, where if she sucks at math I can live with that,” Melissa said.

Katy ISD has a reputation as a district with the bandwidth, expertise and resources for children with disabilities. But even a district lauded as a hub for special education is struggling.

Maria Corrales DiPetta, a Katy ISD spokesperson, said in an email that the district will continue providing students the services outlined in their individualized education plans. If accommodations need to be made for distance learning, a meeting will be convened to review options with the student’s parent and support committee.

Some families in the district have been critical of how it is approaching reopening. The district’s local health authority has mandated that schools remain closed to in-person learning until Harris County drops below Red Alert level 1, which means the county needs to average 400 or fewer new cases of COVID-19 over a 14-day period, among other factors, according to county reopening guidelines.

In a letter signed last week by the superintendents of 10 school districts, including Kenneth Gregorski of Katy ISD, school leaders called the threshold for reopening schools “not attainable” and said they cannot support “your recommendation that would essentially require indefinite closure.”

“We must come to grips with the fact that in order to learn and grow, students must be healthy and safe. That means not setting arbitrary dates for reopening schools that provide false hope, dates this virus does not recognize or respect. Instead, our focus should be on thresholds and on developing measured reopening plans,” Harris County Judge Lina Hidalgo said in a written statement.

Earlier this month, the Texas Education Agency released suggested guidelines for schools to consider students with special needs in their reopening plans and virtual learning strategies. The agency suggested access to assistive technology — things like audiobooks, alternative keyboards and screen readers — and spacing out classrooms with mobility needs, like wheelchairs, in mind. The agency also asked schools to consider on-campus, remote, hybrid and intermittent closure models.

On the ground, Texas schools are trying to figure out how to adjust their special education programs and improve on last spring’s makeshift efforts.

Premont Independent School District in south Texas will open its doors to students with disabilities in late August, weeks before welcoming back general education students in person. North East Independent School District in San Antonio is using Google Classroom, which has built-in accessibility tools like audio for students with hearing impairments and those who have trouble with reading. In other districts, some teachers are moving classes outdoors to make physical contact with students safer.

But some parents can’t wait any longer for public schools to work out solutions. A few weeks ago, 14-year-old Katie, whose disabilities include Asperger’s, obsessive-compulsive disorder and attention deficit disorder, started school at a residential mental health treatment center in San Marcos instead of her school in the Keller Independent School District, said her father, Chuck Lee.

Katie’s parents were advised to send her to the care center for up to three months after she tried to hurt herself, an act her parents believe resulted in part from the stress of the pandemic.

For months, Katie moved between her mother’s house and her father’s. The routine for online school was the same in both homes. Katie would sit and stare at the screen. Click. Click. “Type some stuff,” and that was it, her father said. None of the services she was used to, like face-to-face counseling, could be offered through a laptop. Social reinforcement couldn’t be done through a screen.

“The specialized support she gets to help her with her academics, it’s gone from teacher’s aides and special education specialists and the teachers conforming to her [individualized learning program] to just her mother and I and the laptop,” Lee said.

Under federal law, students with disabilities are entitled to a free education that helps them make progress academically and socially.

A hallmark of special education is the individualized education plan put together for each child by a team that often includes parents, teachers and specialists. Some students may need extra time or additional resources, like word banks and calculators, during tests. Others may need full-time aides or physical therapy.

Katie’s stay at the center is temporary, but as long as she’s there, Lee has more confidence that she’ll get the education she needs.

“It took our daughter a long time to understand that it wasn’t punitive, it wasn’t punishment, she wasn’t being sent away to ‘the bad kid’s place.’ But we just couldn’t get the resources and services that she needed. It’s our hope that … there’s some semblance of normalcy when she comes back,” Lee said.

In some districts, students with disabilities that affect their reading or math comprehension are now spending most of their school days in virtual classes with their general education peers and teachers who may not be know how to make the classes accessible for them, said Jones, of the National Center for Learning Disabilities.

It’s possible that students will be sitting at home staring at their computers unable to do work because they can’t understand the lessons without the teachers turning on accessibility tools, which many general education teachers are unfamiliar with using, Jones said.

Ten-year-old Max had his first day of virtual fifth grade in mid-August. Aside from a hiccup in the morning with logging into Google Classroom, virtual learning went smoothly. There were audio options for Max, who has dyslexia and attention deficit hyperactivity disorder, general education and special education classes for reading and math were staggered throughout his day — but his usual hourlong extra help sessions were cut to just 30 minutes.

Halley Justus, Max’s mom, will tentatively let her son continue in the North East ISD school during the initial three-week remote-learning period. If she sees improvements in his learning, she’ll likely keep him in the school district.

But like many parents and experts, she’s anticipating gaps in what the local public school district can provide and has already begun looking into alternative education programs that she hopes will better meet Max’s needs.

Advocates and special education experts are urging parents to meet with their children’s education teams and look for solutions before pulling them out of their schools. Rynders and his team have found that most schools are open to finding solutions, “but there will still be cases where combat and compensatory education is needed.”

Paying for online school, which Justus estimated would cost about $1,500 a semester, would be a financial burden for Justus, who had to get a laptop from the school after her son did the bulk of his virtual learning on her smartphone in the spring. But with a scholarship, the switch may be feasible, she said.

“If he’s being neglected and he’s not getting the resources, then I already decided I would put him in one of the actual online schools, the ones that have been doing it since before the pandemic,” Justus said.