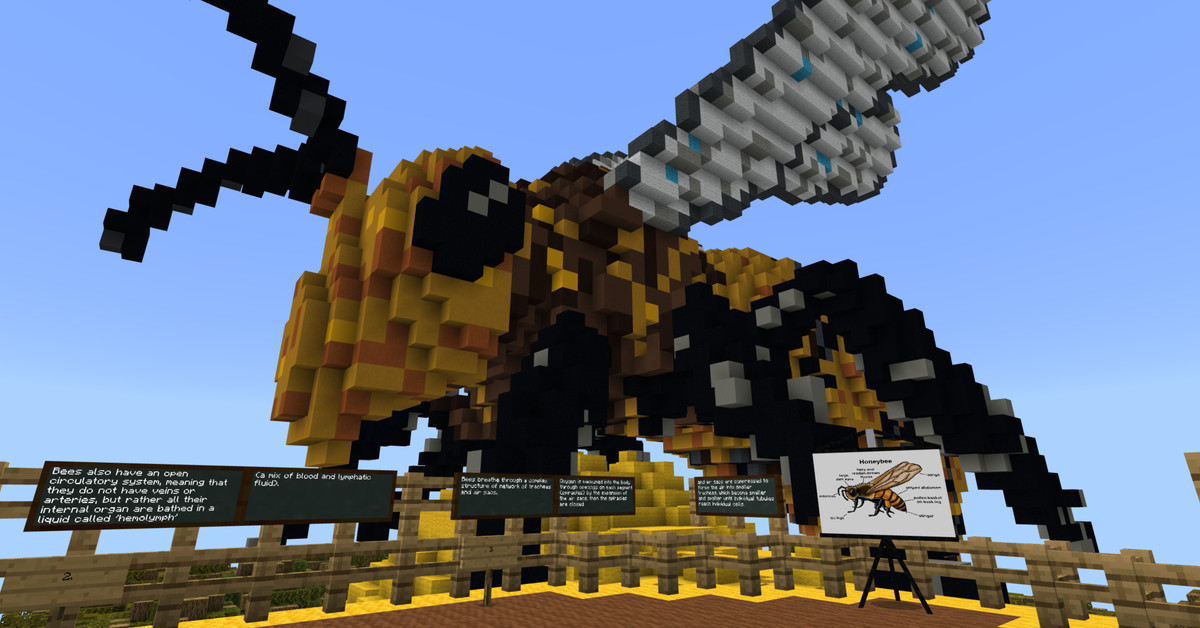 When the pandemic hit this spring, a lot of teachers turned to Minecraft during their mad scramble for tools that could make remote learning work. Earlier this year, Microsoft added an “education” section to the Minecraft marketplace, and since March, 63 million pieces of content have been downloaded.

While Minecraft: Education Edition isn’t new, its digital nature makes it an almost ideal tool for this strange time. It allows for multiplayer activities, is available on a large range of devices, and — perhaps most importantly — is something kids already enjoy doing. “We already had a lot of the features in the game, so we were well-suited from the beginning,” says Deirdre Quarnstrom, GM of the Minecraft Atlas division, which focuses on broader initiatives like education.

The educational offshoot of Minecraft officially launched in 2016, though the game was used in schools for years prior to that, thanks to grassroots efforts from various teachers dating back nearly a decade. (Quarnstrom says that this was part of the appeal when Microsoft acquired Minecraft studio Mojang in 2014. “We really saw the potential to make that something much, much bigger.”) With Education Edition, Microsoft created a more formal structure, with pre-made lessons covering everything from chemistry and coding to giving students the opportunity to explore the International Space Station. You can even play that old classroom staple The Oregon Trail.

There are plenty of games designed explicitly for education, as well as popular games adapted for the classroom. But part of what has made Minecraft so successful is its combination of ubiquitous popularity and a flexible nature. It’s a game where you can do everything from build a library that houses censored journalism to attend a virtual rock concert.

Minecraft is also different from other educational games, which are often rigid and, well, boring. It’s actually entertaining. That’s true whether you’re messing around with friends in survival mode or doing coding lessons in class. ”We started with this premise that Minecraft is a game used in education, and not an educational game,” says Quarnstrom. “And that was something that was really important. We’ve seen educational games that are just not fun, not engaging, that come and go. We wanted to make sure we protected what made Minecraft so immersive and so engaging in the learning environment. As we’ve introduced new features, that’s really helped guide our decisions.”

”We started with this premise that ‘Minecraft’ is a game used in education, and not an educational game.”

All of this combined for a perfect storm as schools were forced to shift to remote learning this year. Minecraft was something many kids already understood, it allowed for real-time interaction between students and teachers, and Microsoft had spent years prior building a fairly robust library of lesson plans covering science, writing, history, math, computer science, and art. The educational version of Minecraft is functionally identical to the base game; it looks and controls the same, and you can still play in groups and build things. But whereas Minecraft is typically about freeform creation or survival, the educational version is slightly more directed.

In one lesson, students are asked to explore a beehive, where they learn about bee castes by helping out worker bees and feeding larvae. In another, they’re given time to explore a shipwreck at the bottom of the ocean, and then asked to write a story about how the ship ended up there. There are also build challenges where teams have to work together to recreate things like a Mars rover, coral reef, or a human eye. In most cases, there are before and after elements: kids will read or watch videos on a particular subject as a primer, spend some time in the Minecraft lesson (either individually or in groups), and then follow that up with a discussion or written assignment.

Despite the influx of new users, Quarnstrom says that Microsoft didn’t make many changes to the game itself. Instead, the company put more focus on the way it interacts with the community. “The shift we made was in how we were packaging things, and onboarding educators and communicating to them,” says Quarnstrom. That meant putting together new remote learning kits for teachers, as well as additional resources for parents to help kids get set-up while at home. The game’s website also gives interested educators the ability to connect with each other to share ideas and tips.

“There are a lot of questions and a lot of uncertainty.”

Some of these initiatives were already in the works but fast-tracked due to the pandemic. Perhaps the most significant is the recent announcement that Minecraft: Education Edition now supports Chromebooks. The game is already available on PC, Mac, and iPad, but Chromebooks are widely used in schools and, crucially, are relatively inexpensive. The shift to remote learning has also raised concerns about equity, as not every student has access to the same tools or parental guidance while at home. Minecraft still isn’t perfect in this regard — you still need a laptop or tablet, and a decent internet connection — but it’s getting better. “Broadening which devices we’re available on will help address some of those equity concerns,” says Quarnstrom.

Minecraft is used differently depending on the age of the students involved. There are arts lesson plans for kids as young as six, while high school level courses are generally focused on the STEM subjects. Meanwhile, college students seem to be more focused on the social aspect of Minecraft, using the base game to re-create their campuses. But either way it offers something unique. As educators struggle with keeping students engaged while learning remotely, here’s a chance to meet kids where they already are.

“There are a lot of questions and a lot of uncertainty,” Quarnstrom says. “My hope is that a tool like Minecraft that is adaptable will help provide some stability.”