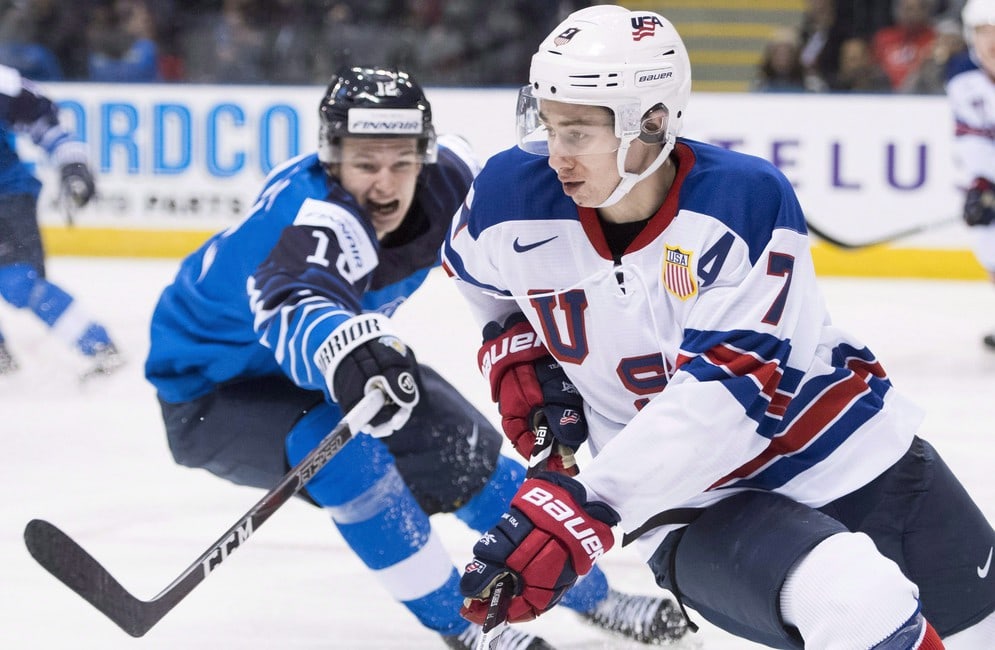 It is no question that the NHL’s style of play is transitioning into a fast and exciting game for all to enjoy. Gone is the “clutch and grab” era, along with other rules that were in place that slowed the game down. Even the enforcer-type player is slowly being phased out because a player can no longer be one-dimensional.

If a player is going to be heavy to play against, they still have to be able to skate and contribute to the entire game, a la Tom Wilson or Ryan Reaves. This shift in style of play brings skill to the forefront, and the young guns of the league have plenty of it. Specifically, defensemen Miro Heiskanen, Quinn Hughes, and Cale Makar still find themselves in the running for Lord Stanley’s fabled Cup with their respective teams.

Heiskanen leads all defensemen in the playoffs with 15 points and is always involved in the scoring surge that seems to be the trend of the Dallas Stars this postseason. While quarterbacking the power play and racking up about 25 minutes on the ice each game, the 21-year old is a dynamic defenseman that helps the Stars create offense.

Makar and Hughes are not far behind with 11 points in the postseason. Makar is able to dazzle with his incredible speed and skating, most notably turning Coyotes’ defenseman Alex Goligoski inside-out with a coast-to-coast rush leading to a goal in Colorado’s first-round matchup against Arizona. Hughes uses his incredible vision of the ice to snap the puck to open teammates, as he did in Game 2 of the first round against the St Louis Blues, where he sprung Bo Horvat loose for the game-winning goal in overtime.

Heiskanen is one of the many Finns to be taking the NHL by storm, and it is all thanks to Finland’s development model. Rather than focusing on winning, the model thrives on developing the individual into a complete, well-rounded player. When the time comes where wins have relevance, it is then up to the coach to instruct these well-rounded players into how to use those skillsets and come together to play as a team.

A perfect example is when we look at Heiskanen as an individual player. He is a smooth skater; between transitioning from forwards to backwards, to accelerating and using his edges, it is tough to get past Heiskanen as a forward.

His shot is lethal; he is able to get the puck through from the blue line with power and accuracy, and his quick release is dangerous in-close. With these tools at his disposal, Heiskanen finds success within the Dallas Stars’ system, which allows him to play to his strengths.

USA is Going All the Way

Working with Finland and learning from them, USA Hockey has created their own American Development Model (ADM) in an attempt to better focus on the part rather than the whole. What has been paramount to the ADM’s success is the age-specific training and competition, creating long-term athlete development at all levels of hockey, including the National Team Development Program (NTDP). Hughes is amongst the first wave of American players to make a quick splash in the NHL as a product of the ADM and NTDP. The improvement to individual skillset is especially evident in Quinn’s performance in this year’s Stanley Cup Playoffs.

At the ripe old age of 20, Hughes is already a difference-maker for the Vancouver Canucks. He moves the puck with confidence and plays with the poise of a five-year veteran while only in his rookie campaign, which wasn’t always the case for players entering the league.

Related: 5 Takeaways From Canucks’ Game 2 Win Over the Golden Knights

In the past, players often got to the NHL and then had to take time to develop in the minors or work their way into the lineup. Hughes, meanwhile, was able to make an immediate impact with his strong skillset.

After his three year tenure in the Alberta Junior Hockey League, Makar committed to UMass-Amherst to continue his hockey career at the NCAA Division I level. After two years at the university, Makar signed with the Colorado Avalanche and immediately joined them in the playoffs.

Just days removed from going to classes on campus, Makar was putting up points as a professional hockey player. The collegiate level continues to develop NHL caliber players in large part due to its format.

Players workout and practice all week, with weekend series of hard, heavy, fast-paced hockey games in a demanding climate. With at least a four-year difference in age between some players, boys are playing against men and are forced to adjust and adapt quickly. The NCAA develops the student-athletes into professionals. Makar is programmed on how to train, practice, and rest from his college experience. This development of how to take care of everything off the ice allows him to consistently produce on the ice.

The Times They Are A-Changin’

Although Bob Dylan was probably not talking about skill development in hockey when he wrote “The Times They Are a-Changin’,” his message rings true through the NHL. The trend of speed and skill is starting to produce positive results and players are entering the league ready to play this way. Through their long-term development via various models and routes, Heiskanen, Hughes, and Makar are able to immediately impact the game at the highest level.