GRAND LEDGE – A man is suing Grand Ledge Public Schools and its Board of Education, claiming officials intentionally violated the Open Meetings Act during a special board meeting in June held over Zoom.

The lawsuit, filed in Eaton County Circuit Court in August by Mike Hoskins, names the school district, the board and its seven members. 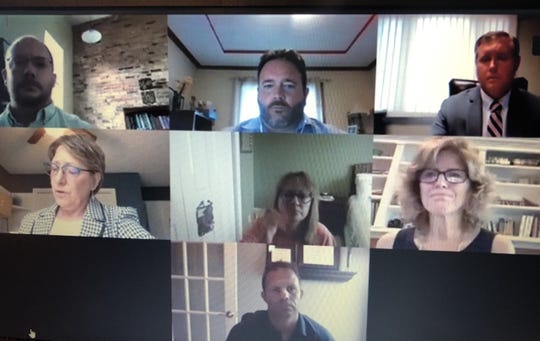 Hoskin’s lawsuit claim’s the board went into an illegal closed session at its June 5 meeting. The meeting was held over Zoom in the wake of comments Brian Metcalf, the school district’s former superintendent, made on Facebook about the death of George Floyd, a Black man who died at the hands of a Minneapolis police officer in May. Metcalf’s comments placed blame on Floyd for his own killing, at least in part.

Board members listened to more than seven hours of public comment during the meeting, attended virtually by approximately 600 participants, before voting to place Metcalf on paid administrative leave. He was fired Sept. 21 at a due process hearing.

In its response to the lawsuit earlier this month, the school district denied the illegal closed session occurred.

Hoskins, who lives in Grand Ledge, declined to comment Monday when reached by phone.

“I think the suit speaks for itself,” he said.

Eric Delaporte, his attorney, also represents Metcalf, who filed a lawsuit against the school district earlier this month. Delaporte said the Board of Education has been “conducting significant public business through the use of text messages and email outside of a public meeting.”

“The Grand Ledge community should be aware of what their public officials are hiding,” he said.

Timothy Mullins, an attorney representing the school district and the school board, said school officials did nothing wrong.

“What the board did was entirely appropriate,” he said.

Hoskins had been waiting to address the board, according to the lawsuit.

“Disconnecting the public from the Zoom meeting prevented the public (and plaintiff) from participating in accordance with the Act and effectively closed the public meeting,” it reads.

Hoskins attempted to reconnect to the meeting but couldn’t, according to his lawsuit.

“Despite having blocked the public from viewing or participating in the meeting, defendants began to discuss skipping the remainder of public comment and going straight to a close session of the meeting,” according to the lawsuit.

Despite being “warned” that going into closed session “outside the public’s view” would violate the Open Meetings Act the board did anyway, the lawsuit states, returning to announce placing Metcalf on leave “…all without having reconnected the appropriate links for public participation.”

The lawsuit asks Judge Janice Cunningham to fine the board’s members, invalidate the board’s June 5 closed session, and order minutes of the meeting and the material used or reviewed during the session be released to the public.

In its Sept. 3 response to Hoskins’ lawsuit the school district denied violating the Open Meetings Act.

The public wasn’t prevented from rejoining the meeting, according to the school district’s response, and a closed session was entered into “…pursuant to the appropriate resolution and vote for the Board to go into closed session subsequent to which the Board returned from closed session and reconvened the Board’s meeting in public.”

A scheduling conference regarding the lawsuit has been set for Oct. 9, according to court records.

The US role in advancing gender equality globally through girls’ education