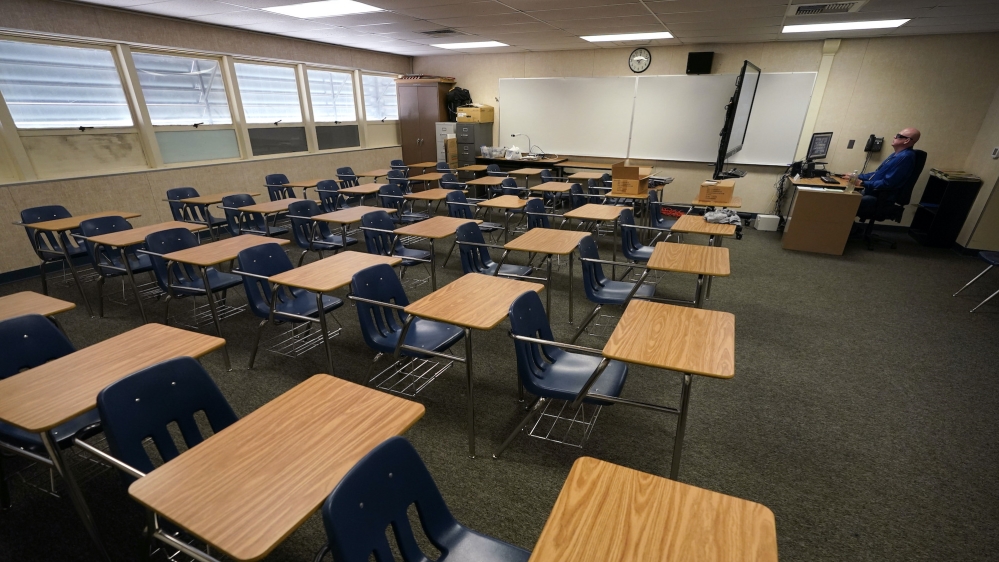 School will start again for us in southern California next week. In some ways, it feels like school just ended. Or it never really ended.

What will be or will not be of the 2020-2021 school year has felt like a constant backdrop to our sundrenched pandemic summer. What will school look like? How will we manage work and school? Will we survive? How is this changing us? Questions languished in the thick summer air.

To cope, I have not really engaged in any of it. I have taken the passive-aggressive stance of ignoring it all. I see the emails but I skim them. I make a half-hearted effort to remember when the next district Zoom call is, but I have not listened to any.

Sure, I am tired. I am tired of the pandemic – as we all are. I am tired of negotiating screen time and mourning the loss of kids’ sports and the breakdown of the life we once knew. But I have also been able to see the positives. I know there are benefits to slowing down and I was happy to read about how others felt this way too.

“We have been too busy!”

“The kids have been over-scheduled!”

“Work should have always been more flexible!”

These are all the silver lining sentiments that were the only bright spots in a depressing stretch of weeks.

But I think my reluctance to jump into the education crisis of 2020 stems from the fact that we have been shouting things we do not really mean. As another season wanes and back-to-school approaches, it is becoming increasingly clear that coronavirus has not reminded us to slow down, it has amplified our collective anxiety about keeping up.

When the announcement that school would begin virtually was made, there was a flurry of texts and articles and conversations about pods and micro-schools and tutors. In my predominantly white and affluent community, much of the conversation was centred on how do we ensure our kids do not “fall behind”.

I know there are real logistical concerns for working parents about starting school. In some cases, the need for pods and tutors is simply logistical. Parents need childcare, and if their kids can be educated in the process, great. But the formation of pods feels inherently exclusive and unequal – both academically and social-emotionally. What about the kids who, for whatever reason, have not joined a pod? What happens when they see eight classmates sitting together at Johnny’s house on Zoom? What happens when they need help and their parents are on a call or on a job?

I realise these kinds of worries and challenges are a privilege when so many are worried about keeping a roof overhead and food on the table. The concerns about the equity of pods and tutors, and the ideas of opportunity hoarding have been raised.

But what about the underlying premise of all of this? We have created an education system based on competition. We are teaching our kids how to become dutiful participants in the rat race.

In 2016, my family moved back to the United States after living in Asia for four years. When I returned to my classroom, I was disappointed by some of the changes I saw. Mainly, the hyper-competitiveness of education seemed to be working directly against cultivating a genuine curiosity about the world and a love of learning. Students were burned out, stressed out and grade-obsessed.

The American Psychological Association has been tracking stress among teens since 2013. In 2018, they reported that not only has stress in teens continued to rise, but also that teens report the highest levels of stress of any age group. This echoes the findings of the Pew Center for Research, which also found anxiety and depression in teens on the rise.

“When it comes to the pressures teens face, academics tops the list: 61 percent of teens say they feel a lot of pressure to get good grades.” Indeed, the most popular question in all my classes, asked nearly every day was: “Will this be on the test?”

I understand that there needs to be a system in place to measure students’ progress and growth. I know there is value in understanding how they compare with their cohorts. But we treat our education system as a game.

For years, politicians have been trying to ensure no child is left behind, schools race to the top, and every student succeeds. But the tutors and pods and micro-schools are just another reminder that none of these reforms has actually worked. In the American education game, it is still the richest who win.

There are many factors that contribute to this disparity in education, but if you whittle away at higher test scores, better teacher retention, higher graduation rates, better access to community support, eventually you are left with a dollar sign.

American schools are funded by a combination of federal, state and local money. NPR’s School Money Project puts the averages about 45 percent local money, 45 percent from the state and 10 percent federal.

The Hechinger Report, a study published in May 2020, revealed just how large the gap between rich and poor school districts in America are. The study looked at trends among school districts between 2000 and 2015. In 2015, the top 1 percent districts nationwide funded their schools at almost three times the level of the bottom 1 percent, with the top schools spending an average of $21,000 per student and the bottom spending an average of $7,500 per student.

What is more, most of the low-performing schools are in urban areas with predominantly minority students, further perpetuating racial and ethnic inequality in education. The Center for American Progress published a report about the long-standing educational inequality between white and minority students. According to author Ary Spatig-Amerikaner, “The most shocking is the data showing that schools with 90 percent or more students of color spend a full $733 less per student per year than schools with 90 percent or more white students.”

In Connecticut, the gap between rich and poor districts is much wider than the miles between them, like high performing Fairfield and low performing Bridgeport. In 2005, the Connecticut Coalition for Justice in Education Funding – a group of parents, teachers, students, unions and residents – fought the state for more equality in funding education.

For years the lawsuit was tied up in courts but, in 2016, the Connecticut State Supreme Court concluded, “…that the trial court was correct in its initial determination that the plaintiffs failed to establish that the state’s educational offerings are not minimally adequate…the state has not violated their equal protection rights under the state constitution.” The court’s ruling has essentially cemented the status quo. These same dynamics play out in states all across the US.

We are a nation built on the merits of competition, so it stands to reason that our education system would follow in kind. But maybe educating the masses should not be a competition. Maybe competition is counter-intuitive to learning.

We are cultivating generations of kids who are excellent at finding the right answers, who may even be interested in finding creative solutions, but the endgame is always to win – the college acceptance, the scholarship, the best job, the best car, the best house, the best, the best.

When COVID-19 brought the world to a standstill, there was a moment of reflection. A chance to see the world as we created it. And a chance to start making changes. Months later, we are staring at the pieces of a broken system and rushing to put it back exactly as it was before.

Our education system has been broken and unfair for decades. Students and parents are flailing (Remember the college admissions scandal?). Teachers are underpaid and constantly asked to do the impossible: take on more students, differentiate to meet all their increasing academic and social needs, provide academic rigour, be empathic, learn the latest technology, do not lose tried and true methods, involve parents, do not involve parents too much. A report by the American Federation of Teachers found: “In 2015, 34 percent [of teachers] said their mental health was not good for seven or more days in the last month. In 2017, that number climbed to 58 percent.”

We all want our kids to succeed and grow. We all know the opportunities top colleges provide. I know that competition is necessary and inevitable and when you have the opportunity to provide for your children, you take it. But this current sprint to pod-up feels so counter to the opportunity to really drive meaningful change.

COVID-19 has also given us the opportunity to understand how powerful cooperation can actually be for the greater good. Masks are more effective when we all wear them. Science is stronger when knowledge is shared, not hoarded in secret. The idea of a social contract is still very much relevant. Now, more than ever is it not the perfect time to move education away from competition and towards cooperation?

As we rush to create pods, bubbles, micro-schools maybe we make the focus not “falling behind” or “getting ahead” but an opportunity to start over.

What if we moved education reform and policies out of the hands of politicians and into the hands of teachers and families? Instead of focusing on trying to mimic the same classroom instruction over a computer screen, what about completely changing how students are instructed? Instead of focusing on delivering the same test-oriented curriculum, how about using this opportunity to really revamp entire curriculums? What if the hours of the school day were re-evaluated to match a broader spectrum of families’ needs?

What if we made the goal of school, not college or career but actually a love of learning? If we can teach our kids the value of learning, college and career will still fall into place. But what if we focus on increasing knowledge to be better, not make more.

COVID-19 has upended all our lives. Instead of letting panic, fear and a survival-of-the-fittest mentality guide us in getting back to normal, let’s redefine normal. Change the game. Because if we are really honest, no one is actually winning.

The views expressed in this article are the author’s own and do not necessarily reflect Al Jazeera’s editorial stance.