If Texas Education Commissioner Mike Morath has any say in the matter — and he most definitely does, the state’s battery of standardized tests will resume in the spring despite pleas to suspend the assessments for the 2020-21 school year.

Morath shared those thoughts in a virtual fireside chat at Friday’s State of Public Education luncheon, held by the Dallas Regional Chamber.

The shutdown of public schools in mid-March because of the COVID-19 pandemic led Gov. Greg Abbott to waive the administration requirements for the State of Texas Assessments of Academic Readiness, or STAAR, tests last school year.

This summer, parent groups and educators hoped the STAAR might get benched again for the upcoming school year. A handful of state lawmakers — including Dallas Republican Rep. Morgan Meyer — sent letters to Morath’s office asking for another suspension. 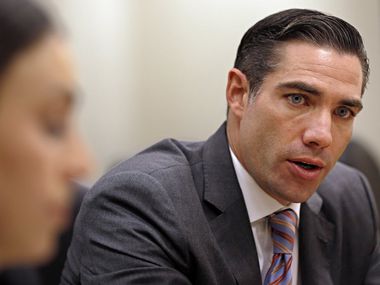 That’s not the path Morath is ready to take, however.

When asked by Ford about his plans for STAAR this school year, Morath said that he’s been “pretty consistently clear.”

“The expectation is certainly by April, we should be able to assess [students],” he said.

Given concerns among educators about academic regression during COVID-19, being able to discern whether they are mastering the material is essential, Morath said.

“Teaching without some form of testing is just talking,” he said.

Morath was not as explicit when addressing the state’s A-F school accountability system, which largely uses STAAR results to grade campus and district performance.

He did not address whether the Texas Education Agency would alter those grades, perhaps limiting them to districts only, as the agency did in the first year of the rollout of A-F.

The commissioner was clear, however, that he believed it was critical to evaluate how well school systems are doing in getting students to learn content, adding that the TEA does “intend to publish” accountability data.

“We spend a lot of money on public education,” Morath said. “We need to find out how well that money is working for those kids.”

Keeping an eye out

Since the COVID-19 crisis started in March, Morath estimated that the TEA had responded to 5,000 emails and phone calls from school administrators, answering questions and listening to comments on how to move forward during the pandemic.

On Thursday, the TEA — in conjunction with the Department of State Health Services — released a COVID-19 dashboard to track cases among staff and students. Since reopening for face-to-face instruction, school systems have seen 4,517 documented cases of the novel coronavirus, affecting roughly 0.2% of nearly 2 million teachers, staff and students who have returned to campuses.

When asked if he had any concerns about an increase in infections on the return of those large urban districts, Morath said that he hoped the “knowledge base” on how to return to school safely, acquired in smaller districts, could be shared with those embarking on that journey.

The state’s response, Morath added, would be nimble if community conditions started to change.

“We’re trying to keep an eye on that, and … adapt accordingly,” he said. “As they say, ‘No plan survives first contact with the enemy.’”

When asked by Ford for their wish lists for the upcoming session of the Texas Legislature, the superintendents’ comments centered around one key issue: money.

During its last session, the Legislature passed a long-awaited school finance bill: House Bill 3. That effort pumped $6.5 billion into public schools, creating a raft of new incentives and programs that schools have begun to adjust to in order to receive additional funding.

But the state’s uncertain financial picture amid the pandemic has educators worried. If the economy slides into a deep recession, the impact on public school funding could resemble what happened in 2011, when $5.4 billion was cut from education budgets.

Stone, Richardson’s superintendent, said she felt like educators were “back at square one” when it came to school finance because they are fighting to make sure lawmakers “fully fund the promises of House Bill 3.”

Bonser, Plano’s leader, said in order to address significant learning loss brought on by the pandemic, “the resources that we will need to close those gaps, it’s not less.”