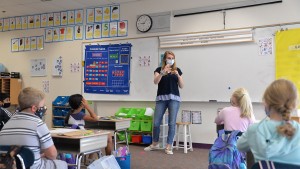 Colleen Ortakales in front of her 2nd-grade classroom at Riddle Brook Elementary School in Bedford.

Late last week, New Hampshire school districts learned that federal money they were previously thought they could rely on would no longer be available to cover costs associated with their response to Covid-19.

On Sept. 11, the state was informed by the Federal Emergency Management Agency that they will not be covering reimbursements for face masks and other supplies to be used by teachers, staff and students. Additional supplies not covered include any extra desks or chairs, cleaning supplies and the purchase and installments of physical barriers, such as Plexiglas.

Many school districts in the state had intentions of seeking reimbursement from FEMA for these additional costs, including the Salem School District, which was seeking to have a large amount of money reimbursed.

Salem’s Assistant Superintendent for Business Operations Deborah Payne said that the district was looking for a FEMA reimbursement of about $500,000.

She explained that in early summer the district had begun acquiring all types of PPE as well as acrylic shields for desks – all equipment the district would not have needed if not for Covid-19.

As for what the district will be doing now to cover these costs, Payne said the district is working with the school board to discuss that.

During a briefing on Covid-19 Thursday, Governor Chris Sununu said there are still opportunities for districts to apply for and receive some of reimbursement funds from the state through money it received under the federal CARES Act.

Manchester is one municipality seeking a reimbursement request to the Governor’s Office of Emergency Relief and Recovery, which oversees the CARES spending.

In March, Craig said. “FEMA had released guidelines on Covid-19 funding, specifically saying that they would cover testing, disinfectant, PPE, so the school district moved forward with making those purchases, which are critical to ensure our students, our educators, our staff and our visitors are safe in our schools for the 2020-2021 school year.”

For Craig, the new notification from FEMA was a shock and extremely disappointing.

“It means that right now the school district is left with over $2.2 million in expenses that they expected FEMA to reimburse, so now the district is in a place where they need to cover those expenses,” Craig said.

Craig requested an allocation from GOFERR for about $5.5 million to the school district and for it to consider funding other school districts throughout the state that could demonstrate that they are in need of help.

The Manchester School District did receive $5.8 million in CARES funding, but its estimated cost for Covid-related expenditures is nearly double that figure, coming in at about $11.3 million.

“They more than exceed what we got in CARES funding,” Craig said. “If FEMA won’t reimburse for those, we’re going to have to take the money for PPE and other things out of the CARES funding.”

The FEMA notification on reimbursements came as a disappointment to Franklin Schools Superintendent Daniel LeGallo as well.

The Franklin School District was actively working to seek the reimbursement.

“We were looking to go that route, we were actively working on that grant possibility,” LeGallo said. We had made contact with them and had been working with them up until Friday when that was announced.”

LeGallo said the district would have been looking to go after $50,000 in FEMA reimbursements. Now that this potential stream of funding is not available to the district, LeGallo said he’ll have to leverage district funds as well.

In Berlin, the school district was not planning on seeking any reimbursement from FEMA for PPE at this point, but did inquire about help covering costs with a different expense.

“We had reached out to FEMA to help cover expenses with HVAC corrections that need to be made,” Superintendent Julie King said. “I don’t know if this is going to impact that or not. That’s our biggest concern right now.”

This article is being shared by partners in The Granite State News Collaborative. For more information, visit collaborativenh.org.