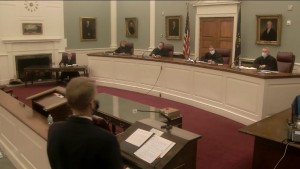 Earlier this month, the American Institutes for Research presented the Commission to Study School Funding with a model to fulfill the state’s duty to fund public education that pegged the cost of adequate education in 237 school districts between $12,000 and $28,000, based on the character of their enrollments.

On Thursday, the New Hampshire Supreme Court heard oral arguments in a suit brought by four school districts and upheld by the Cheshire County Superior Court. The suit charges that the state has failed to meet its obligation to fund an adequate education. The state contribution consists of a base amount of $3,706 and, with additional differential aid, averages about $4,500 per pupil, or less than a third of the actual average cost of nearly $16,400 pupil.

In appealing the decision of the Superior Court holding the current funding system unconstitutional, Solicitor General Dan Will did not directly address the merits of the case. Instead, he argued that the evidence presented by the school districts failed to support the opinion of the court, which itself committed a number of errors of law in reaching its opinion.

Representing the plaintiffs – the ConVal, Mascenic, Winchester and Monadnock Regional school districts –attorney Michael Tierney underscored the difference between the cost of an adequate education incorporated in the state distribution formula and the actual costs incurred by schools throughout the state. He calculated by the state’s own formula the cost an adequate education came to $9,929 per pupil, plus the cost of transportation.

Senior Associate Justice Gary Hicks remarked that “common sense” indicated that $3,706 per pupil fell short of the actual cost of educating a student. He was echoed by Justice Patrick Donovan who said the cost of buildings alone dwarfed the state’s calculation.

Justice James Bassett noted that the state was not challenging the precedents established by the court in the string of litigation that began when the court found the Constitution afforded every child a fundamental right to an adequate education and obliged the state to pay for it.

As the court considers the case – a decision is expected sometime over the next six months – the Commission to Study School Funding is expected to present recommendations for overhauling the current system before the year is out.