When it comes to introducing electric vehicles to school district fleets, Patrick Gervais wants decision-makers to know that the future is now, even with North America under the ongoing stranglehold of the new novel coronavirus.

“I saw a survey [recently] that something like 92 percent of people think the electrification of transportation is five years away, 7 percent knew about it and only 1 percent are buying it,” said Gervais, vice president of marketing and communications for The Lion Electric Company, a Quebec, Canada, manufacturer of zero-emission commercial vehicles. “What’s really important right now is that people need to know the technology is available now, it’s working, it’s working really well and it’s the right thing to do.”

Gervais is among industry leaders at several firms promoting electric-vehicle options that are encouraging school bus fleet managers to think outside the box, when it comes to traditional acquisition and financing strategies. Particularly as the budget impact from this year’s COVID-19 pandemic appears likely to spread through the next few fiscal years.

“I don’t want to be a doomsayer, but you have to look at everything realistically. With the federal government spending $2.5 trillion-plus without backing, there’s going to be a cause and effect,” said Marc Riccio, vice president of sales for Highland Electric Transportation in Hamilton, Massachusetts. “Whether it’s inflation or deflation ramifications, a devaluation of the dollar or something else, there has to be a corollary effect, which we’re seeing the early manifestations of through education budget cuts across the U.S. The chickens will come home to roost.”

School districts across the country have already seen budget reductions. In May, California Gov. Gavin Newsom proposed a 19-percent funding cut for kindergarten through 12th-grade education, at a time when schools were scrambling to provide laptop computers and at-home lunch delivery to millions of children. Meanwhile, Education Week reported that remote learning, expanded food service and an extended school year to make up for lost days will cost the nation another $41 billion or 5 percent, according to a Learning Policy Institute analysis.

“Electric has come a long way since it first came out in the early 1990s. We’re finding some districts are net positive and actually making money,” Bluhm said. “Electric can really support 80 to 90 percent of bus routes today and it’s much more accessible than people might realize

He added, “Most districts are saving 50 percent on maintenance because of the huge reduction in moving parts. Beyond maintenance, there’s a significant saving on fuel costs. That’s where districts are going to see the most savings.”

Whether they are generating revenue or simply achieving savings, the California districts that do so have the state’s low carbon fuel credit and various grant programs to thank.

“The return on investment is right away. The Twin Rivers Unified School District [in Sacramento] says they’re saving at least $15,000 per bus per year,” Gervais said. “When you have 100 buses in your fleet, that’s a lot of money. A lot.” 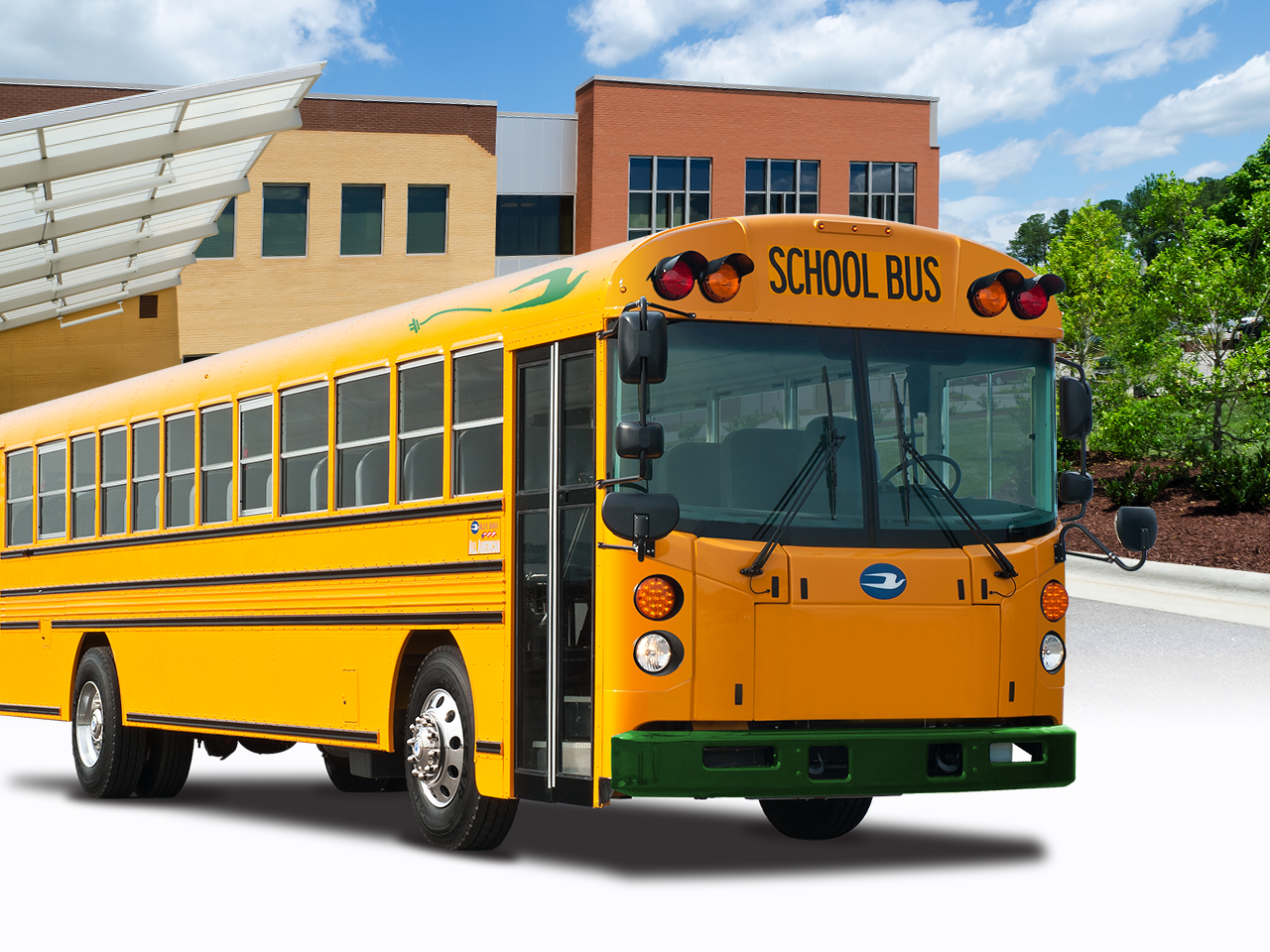 Riccio and Gervais noted that other states are following California’s example. They also encourage fleet managers to advocate for pro-electric programs in their states.

“New York, New Jersey, Connecticut are some great markets. Washington has some very, very good intentions. Its governor would like to see the state’s emissions at 75 percent below 1990 levels by 2040 and at zero emissions by 2050 through a 95-percent reduction of emissions and 5-percent carbon sequestration,” Gervais shared.

Gov. Jay Inslee’s proposal also would require that 25 percent of vehicles sold in Washington to be fully electric by 2025.

Riccio recently joined Highland Electric to tout an innovative approach to eliminate the financial risk profile of school districts interested in making the switch to electric school buses. He said the company’s strategy is based on helping districts shift the cost of acquiring vehicles from a burdensome, upfront capital expenditure to a more manageable, ongoing operating line item.

“If a district has an acquisition plan for five diesel buses at $500,000 for that year, with our model, we’re looking at a fixed price per unit of $25,000 to $40,000, depending on the district’s total cost of ownership (TCO) of traditional diesel,” he said.“It doesn’t take a math major to know you’re going to have a surplus to shift from [capital expenditure] to [operating expenditure]. We’re a value-add option that school districts mat exercise, especially given the potential, future economic uncertainties tied to the fallout from the COVID-19 pandemic.”

Highland, which has the financial backing of a major energy industry player in its corner, bases its business model on long-term agreements that allow it to recapture its investment amortized over time. “For us to make a long-term bet with capital, we’re making the assumption from the electric front that we will be recouping our investment in 10 years or beyond,” Riccio explained.

Highland owns the buses and charging stations its customers use, holds vehicle titles and warranties, and contracts maintenance to its customers.

“We take all the risk and subcontracting maintenance is a nice revenue add for the district,” Riccio said. “If a district has an appetite for electric and they’re looking for volume acquisition in a programmatic manner over time, we’re the partner for them. If they’re a one-trick pony, we’re probably not that partner.”

Riccio said Highland’s approach involves working with any major original equipment manufacturers with whom clients have existing relationships. “We’re not about making anyone switch OEMs. Our model is to work with who they’re comfortable with, as we are brand agnostic,” he added.

Gervais, with the Lion Electric Company, said the estimated 60-percent maintenance savings only increase over time, as a 12-year-old diesel engine’s 2,000 parts will require more maintenance and far more fluids than an electric engine’s 20 parts with only three that are moving. He noted that Lion Electric’s products are purpose-built, eliminating issues that can occur with retrofitting.

“Obviously when you come up with something new, people are kind of afraid of going toward something new and different … even though we’re almost 12 years old,” he said, adding that misconceptions about the costs and capabilities of electric vehicles add to fear. For example, he said that hesitant fleet managers who have heard tales that a bus charging station costs as much as $100,000 are relieved when they learn the expense is typically only between $1,500 and $5,000.

Gervais advised that the school bus industry needs to educate fleet managers about such basic issues as how and when to recharge vehicles, how to make sure they’re ready for use when needed and how to minimize utility bills.

Bluhm at A-Z Bus Sales noted that upfront costs have long been a barrier for some potential buyers.

The growing number of grants “can certainly make a difference, but even without grants we’re seeing districts look at the potential for savings as a critical piece of the puzzle,” He said.

“We’re very hopeful that even without grants there will still be [an electric] bus that makes sense for every district,” he added. “We’re not there yet, but it’s coming.”

A-Z Bus Sales recently sold its first electric bus in Hawaii. It has deployed more than 100 electric buses in California and that number is expected to double by year’s end. The company employs a dedicated grant coordinator to help clients locate and apply for public funding.

Bluhm acknowledged that electric vehicles may not be the best fit for everyone yet. “For districts that do a lot of field trips, it can be challenging,” he said. “Anywhere that has long rural routes of 150 or 200 miles a day can also be a challenge.”

Technology has overcome some previous barriers and will resolve other issues as time goes by, Bluhm predicted.

“With more fast-charge locations coming online, it will become easier over time to handle those longer trips and routes. Routes with a lot of hills used to be a challenge but with regenerative braking, we’re seeing hilly routes as a great deployment for buses today because what you lose [in the battery’s charge] on the way up you get on the way down,” he explained. “Electric technology has advanced so much. With different chemistry in today’s batteries, they have more range and more uptime.”

The latter trait is especially important.

“We know this can’t be a technology that works every other day. It has to work every day and it does,” Bluhm concluded.