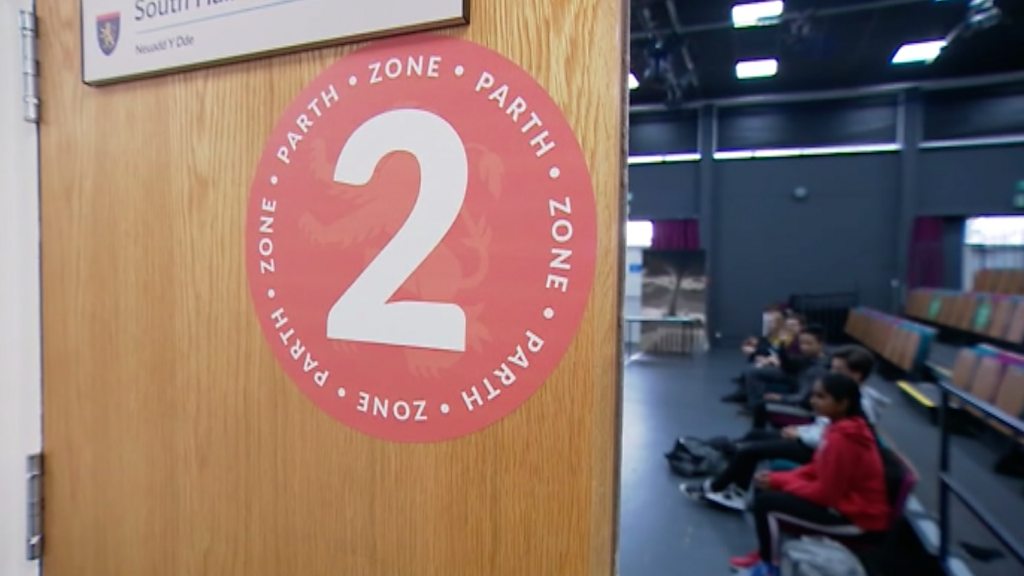 Groups of children being told to self-isolate due to school Covid cases is to be expected, according to the education minister.

Since term began, dozens of schools have reported cases and entire year groups have self-isolated.

Pupils are being grouped together in “bubbles” in an attempt to limit the spread of the virus in the case of an outbreak.

After a staggered start to the term, all year groups are due back full time from Monday.

Government guidance to schools says they should group pupils together and avoid contact between groups as much as possible, but how this is done will depend on each individual school.

What’s happening in schools across Wales?

Public Health Wales data released at the end of last week indicated that there had been 36 cases in 31 schools.

All Year 7 children at two Newport secondary schools were told to self-isolate after pupils tested positive for coronavirus and a Bridgend school told more than 200 pupils to stay at home.

But the number of schools has risen over the weekend and it is believed it could be closer to 50.

In Cardiff, eight pupils and three members of staff from Llanishen Fach Primary School have been asked to self-isolate. Another 57 pupils and two staff members from Whitchurch High School are also self isolating.

A Welsh Government spokesperson said the operational guidance for schools made it clear that “small, consistent groups help reduce the risk of transmission by limiting the number of learners and staff in contact with each other”.

How do ‘bubbles’ work at school?

The school’s 1,800 pupils are being organised in separate groups in six learning zones.

“Essentially what we’re doing here is making sure that children of different age groups are kept separate – this is the idea that you might have heard of as the bubble,” he said.

“So in our school’s case we have six learning zones…and the idea is that those pupils come in separately at the start of the day, they take their breaks separately, they eat separately, they go home separately and therefore tracking and tracing can work more effectively if, God forbid, we had an outbreak.

“I think the name of the game at this point has to be to stay as calm as you can, to respond to events as they occur and just deal with them in a calm way.”

So what do pupils think?

Gagany, 14, said: “At first I was quite anxious to go back because I thought there was no security measures put into place for school, because in Olchfa there is a lot of students and it’s quite impossible to social distance everyone.

“But I think they found a method to find a good way to socially distancing everyone and we have our own bubble, so we stick to our bubble and we have a learning zone.

“By following these measures it keeps everyone safe and secure from the virus.”

Max, 14, said: “I think it’s definitely taken a lot of getting used to, especially coming to school – there’s certain gates we have to come through and zones you have to go through, rules you have to abide by.

“But I think anyone who’s been alive in the last six months would understand how Covid works and the reasons we’re taking the safety measures and I think that as long as everything’s in place it’s the best for everyone.”

“Moving classroom to classroom you do notice it if you are paying attention to everything around, but the teaching hasn’t changed. It’s gone really smoothly.”

Thomas, 14, said: “I was initially quite worried… through lockdown up until we came back. But since we came back I’ve got more confident and it’s a new normal, so we have obviously been in our bubbles and we’ve adapted to that very easily.”