“I have nothing personal against Rep. Bowers [but] I wholeheartedly disagree with her politics,” Douglas said. “This economy was built on Republican leadership not on progressive policies.”

But Bowers said she’s proven she can represent her district and gained experience that will be needed next session when lawmakers will face an expected budget deficit of billions of dollars.

The race has picked up steam after Bowers called Douglas a “boy” and said he needed a “whooping” during a fundraiser. Bowers said she was reacting to comments Douglas made at an NAACP event where he said Democrats tell minority voters they are “victims.”

Bowers was one of 12 Democrats to flip Republican seats in 2018.

Once elected, she avoided divisive issues and tried to work across the aisle. Less than a week after her win, she pledged support to Dennis Bonnen — a Republican — in his bid for House Speaker, because he said he’d prioritize transforming the Texas school finance system.

She said the most important legislation she helped pass included that school finance overhaul, a bill to require an explanation of major changes in prescription drug pricing, another to raise the age to purchase tobacco products, and the elimination of red light traffic cameras.

“These bills are the ones that really impacted our community,” she said.

But her work is not done, she said. With the state facing a nearly $5 billion budget deficit, voters need to send someone to Austin who has proven they will fight for public education. She committed to keeping schools funded at the levels in last session’s school finance bill.

“It’s going to be tough, but we do owe it to our education system,” said Bowers, who was once a substitute teacher. 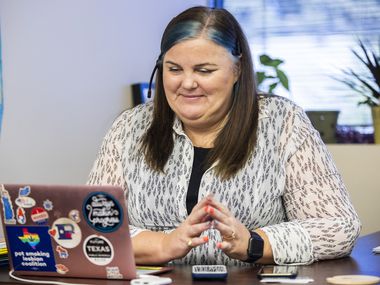 Douglas, a political newcomer, also said he would fight to protect funding for local schools. During a budget shortfall, he said, the only two things he would not cut are schools and law enforcement.

But the two candidates differed on private school vouchers. Bowers said she opposes them, while Douglas said he’d have to consider the specifics of a bill.

Douglas said the election’s major issue is the economy and it’ll take people with business backgrounds to help Texans get back on their feet after the COVID-19 pandemic.

“We gotta get jobs back,” said Douglas who moved to Dallas from Oklahoma when he was 26 to become a pharmacist. “There’s 2 or 3 million Texans out of work. Progressive policies won’t do that. It’ll take entrepreneurs to get that done, it’ll take people with that mindset to figure out how to get our economy going.” 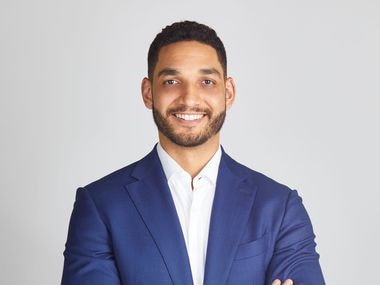 Douglas, now 33, runs several pharmacies through his company Crimson Care Pharmacy Group. He said he’s seen how difficult it is to do business in states run by Democrats and he’s running to keep Texas business-friendly.

“There’s a reason people are moving to Texas and it’s not because of our temperate weather,” he said. “They’re moving to come here because of the businesses. That’s why they’re leaving progressive states like California.”

He’s also worried that increasing property taxes are pricing Texans out of their homes. He said he’d support any bill to cut property taxes.

“You can’t say the same thing about Rep. Bowers,” he said. “When there’s been an opportunity to vote for her constituency to lower property taxes, she hasn’t done so.”

Bowers voted against legislation that would cap property tax revenue for local governments last session. She said local government officials in her district told her the bill would have an adverse effect on their budgets and their ability to provide services for their residents.

“I want to help find real property tax relief, not a bill that has other areas that would end up as a detriment,” she said.

She said she voted for some tax relief in the school finance bill, which reduced property taxes by increasing the state’s portion of funding to local public schools. But that was still not enough and she would look for other ways to reduce costs to taxpayers.

Bowers supports the expansion of Medicaid. Douglas does not.

“What we’ve seen the last six months is that the more involved the government is in health care, the more problems,” Douglas said. “The government can barely tie their shoes, much less coordinate health care.”

His solution is sending more lawmakers to Austin who understand the factors that drive up health care costs.

“Legislators have to understand downward pressure on hospitals on pharmacies,” he said. “All the government and free healthcare all sounds good in theory but it doesn’t work.”

He said he’d fight to cut regulation in the pharmacy industry and lower prescription drug prices.

Bowers said voters should look at her record of pushing for affordable health care options. During the pandemic, she worked with other legislators to lobby for COVID-19 testing sites in her district.

And before joining the Legislature, she advocated for parks and healthy food options in her community. Bowers said one of the main distinctions between her and Douglas is her years of public service. She served as a staffer for Dallas Rep. Toni Rose, worked as a substitute teacher, and served on the Rowlett Parks and Recreation Board before taking office.

“I’m part of the fabric of this community,” she said. “The people that I serve appreciate that. I’ve been here, made my home here and regardless of what happens I’ll be here.”

Douglas said he’s qualified for office in other ways. Since moving to Dallas, he’s focused on building his business, created jobs and gained valuable industry experience.

During the pandemic, he’s continued to block walk streets in his district to speak with voters. Often clad in athletic gear and headbands to endure the summer heat, Douglas documents his interactions with voters on social media. He said his business experience and outgoing attitude will help him keep a good pulse on his district’s needs.

“You can look at what I’ve already accomplished,” Douglas said. “I’m an innovator. I’ve got an entrepreneurial mindset, I’m a problem solver. Coming out of COVID, it’ll be more important than ever to have people with small business experience and health care in government.”

CLARIFICATION, Sept. 16, 2:22 p.m.: An earlier version of this story said Douglas made comments at an NAACP even that minority voters thought of themselves as “victims.” Douglas said he was referring to the message Democrats give to minority voters.