Get the latest BPR news delivered free to your inbox daily. SIGN UP HERE.

President Donald Trump indicated that the U.S. Department of Education may yank federal funding from public school systems that implement the 1619 Project curriculum.

In response to a tweet that California is incorporating the left-wing propaganda into its educational program, Trump responded that “Department of Education is looking at this. If so, they will not be funded!”

Department of Education is looking at this. If so, they will not be funded! https://t.co/dHsw6Y6Y3M

In the divisive and unreliable alternative journalistic take on American history that the New York Times created and then managed to spread far and wide, 1619 refers to the year that slaves first arrived in the colonies. The premise by the authors is that 1619, not 1776, was thus the year of America’s founding.

The controversial 1619 curriculum has reportedly been distributed to 3,500-plus K-12 classrooms in America.

U.S. Sen. Tom Cotton (R-Ark) has already introduced a bill called the “Saving American History Act of 2020” that would strip federal cash from any school that uses the material. Cotton has acknowledged that federal funding comprises a small part of a state’s education budget, however.

The 1619 Project appears to be a component of critical race theory (CRT), which has gained currency in academia and in the federal bureaucracy, among other sectors, and views virtually everything through a racial lens, especially as it pertains to so-called white privilege.

“Today’s critics treat CRT as agitprop advancing totalitarianism in the guise of research and scholarship. As blatant racism becomes a thing of the past, they contend, leftists are left grasping for flimsy evidence, either by expanding the definition of racism or by making outrageous statements, to keep up their narrative of oppression…Where critical race theorists depict the Western Enlightenment as the ultimate oppression narrative, CRT’s foes uphold Western values as humanity’s best, if imperfect, hope for progress,” RealClear Investigations explained.

“You can’t be against racism if you’re committing it,” FNC’s Tucker Carlson separately remarked on a recent podcast.

This week, President Trump banned the use of taxpayer money to fund “un-American” critical race theory indoctrination sessions in federal agencies after information leaked out about a three-day reeducation camp at a research laboratory that designs America’s nuclear weapons.

According to The American Mind published by the Claremont Institute, “The 1619 project…is socially divisive on its surface and at its core. In its racialized partisanship it divides white and black Americans from each other, and in its anti-Americanism it divides people, especially the many students it bids to influence, from their country.”

No reasonable person objects to teaching American history in all of its dimensions, good and bad, but with the emphasis on actual history.

“[M]ultiple historians have criticized the series of articles for multiple inaccuracies, including the argument that the American Revolution was fought not to achieve independence from Britain, but to preserve the institution of slavery,” Fox News explained.

Trump’s social media announcement about the possibility of withdrawing 1619-related funding prompted a significant response on Twitter. Here is a sample of those who find themselves aligned with the president on this issue.

Perhaps the reason the US lags behind many other countries in education is that our schools, from pre-school to college, have replaced reading, writing, & arithmetic, with “17 zillion reasons to hate America” indoctrination as their main focus.

Just introduced….BLM handbooks AND curriculum in my school this year.
As a teacher I have to tell my white students they are racist and have white privledge that AMERICA still has systemic racism and it’s because of their racism.

Our country is unrecognizable😡😢

You sound like an idiot. History is history. President should defund schools if they teach w bias and false information. What they’re teaching are lies, brainwashing and division.

It’s not just California, Mr. President. ALL of our schools have been infiltrated with anti-American indoctrination of our children. PLEASE eliminate common core and hold radical, activist teachers accountable. Our childrens’ futures are at stake!

They aren’t accurately teaching about slavery. Otherwise you would know every race practiced slavery, & white Christians were the first to abolish it. Democrats were the slavers in the U.S. That Republicans were willing to die to end slavery. That slavery still exists today

Wed Sep 9 , 2020
The number of unemployed Americans vastly outnumbers the number of open jobs in every single state. Why it matters: Even though we’ve come back from the worst unemployment numbers, the pandemic’s economic toll keeps turning furloughs into job losses — and pushing millions of people out of the workforce entirely. […] 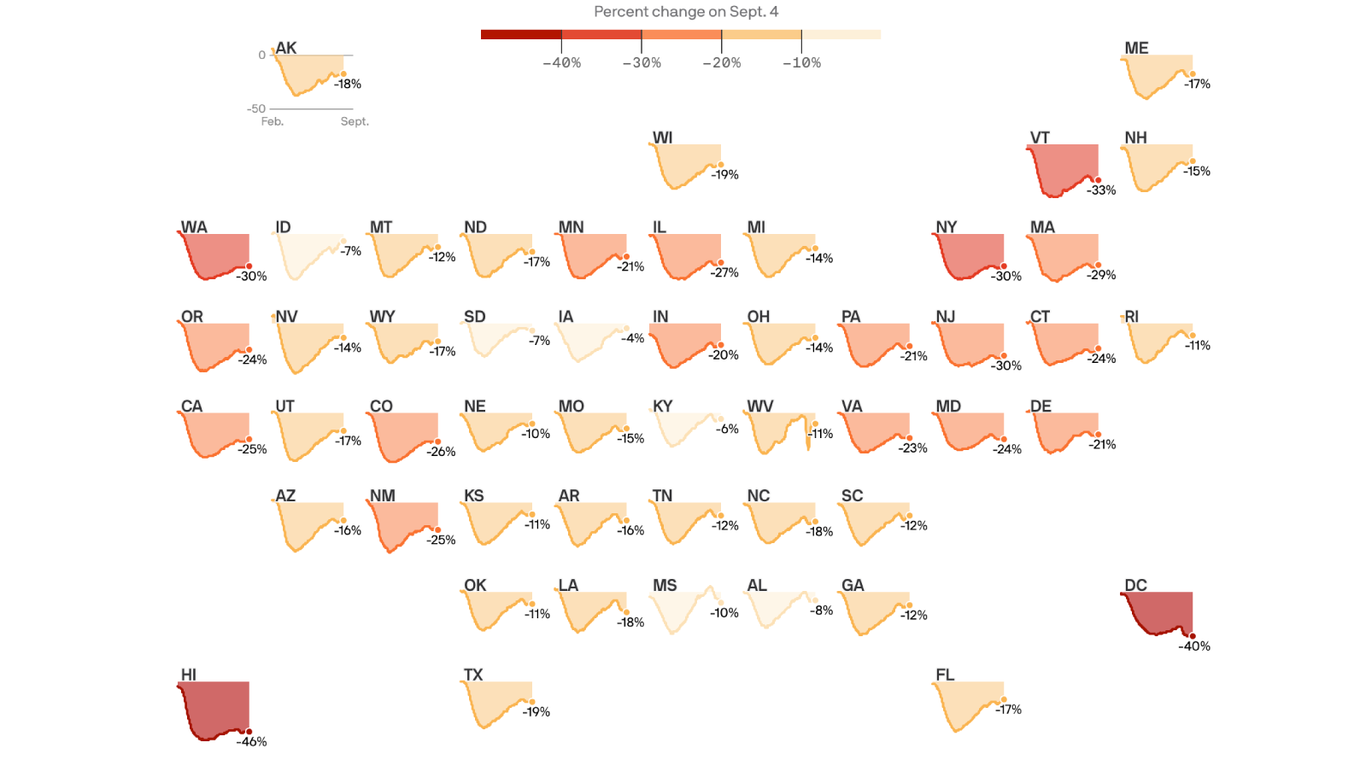