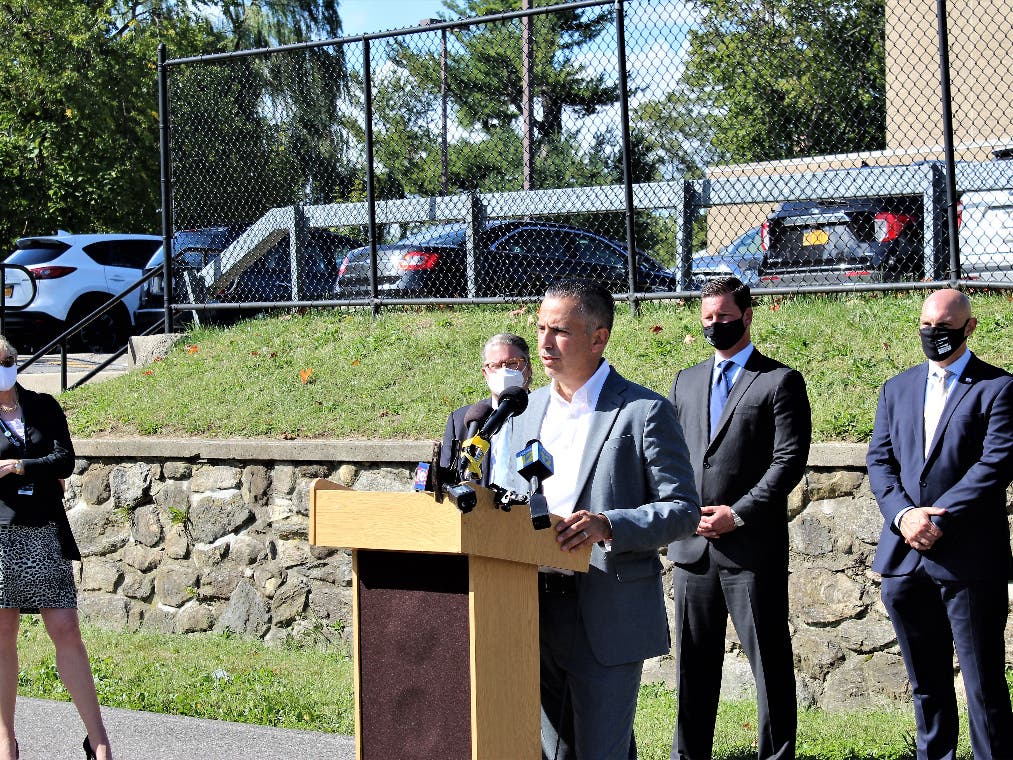 Superintendents from across Westchester and County Executive George Latimer are urging federal officials to provide much-needed relief to school districts overburdened by the cost of opening during a pandemic and facing the potential loss of state funding.

During a news conference at Roosevelt School in Ossining this week, they asked for quick action on Democrats’ new Heroes Act legislation, which would provide $2.2 trillion in pandemic relief, including to school districts. The Democrat-controlled House of Representatives narrowly passed the Heroes Act Thursday, but it faces an uphill battle in the Republican-led Senate.

“New Yorkers are not asking for a handout,” said White Plains Superintendent Joseph Ricca, president of the Lower Hudson Council of School Superintendents. “New Yorkers, just like the other 49 states, are looking for the federal government to intercede in a disaster.”

Districts in Westchester County have spent millions of dollars to reopen schools safely – on staffing, personal protective equipment, cleaning supplies and more. That amounts to $2 million for White Plains, $400,000 for Ossining, $600,000 for Tarrytown, about $100,000 for Elmsford, and $10 million for Yonkers, superintendents said.

Schools address more than just academics, Dr. Sanchez said. They are meeting the social emotional and mental health needs of children, helping feed children who are hungry, and ensuring families have the technology and connectivity necessary for learning.

“We all represent different districts, but we share one thing in common: We want to ensure the success of every single child,” he said.

Dr. Sanchez said federal lawmakers must ensure schools have the funding they need to maintain programs and not adversely affect students’ experiences.

Westchester County has partnered with school to provide any pandemic-related assistance it could, County Executive George Latimer said. Now school, county and state officials are asking Washington for help. New York pays billions of dollars more in federal taxes each year than it gets back in federal spending. “Are you going to be a partner? Are you going to help us through this difficult situation?” he asked.

The current financial struggles are not the districts’ fault, the county executive said. “We had a need to shut the society down to deal with this pandemic,” he said.

New York state has a $14.6 billion deficit due to the loss of revenue and economic shutdown during the pandemic, said state Sen. Pete Harckham of Peekskill. At the same time, schools have many unanticipated pandemic-related expenses. Washington officials need to “stop the nonsense,” he said. “This is not a blue state issue. This is not a red state issue. This is an American issue.”

Gov. Andrew Cuomo has said that school districts could face foundation aid cuts of 20% if the federal government does not provide additional funding. For White Plains schools, 20% is $6 million. In Yonkers, which has already had layoffs, it would be $69 million.

Pleasantville School District Superintendent Mary Fox Alter noted that New York pays many billions of dollars more in federal taxes each year than it gets back in federal spending. “COVID-19 has hit us hard and we are asking for a little help from a friends in Washington, a little help from our friends, from fellow Americans. We need this now,” she said.

Ossining parent Beth Sniffen, regional director of the Westchester-East Putnam Region PTA, asked New Yorkers to urge federal officials to adopt the Heroes Act. “I just want to say that it takes a lot of money to run our schools, and in addition this year, we have to pay for all the needs in this pandemic,” she said.