The Bank of England’s chief economist warned against extending a government program to retain employees during the pandemic and said that some jobs “may well not be coming back.”

Andy Haldane said in an interview that “keeping all those jobs on life support is in some ways prolonging the inevitable in a way that probably doesn’t help either the individual or the business,” according to City A.M.

The program, which covers wages for furloughed staff, is set to expire next month.

In the U.S., President Donald Trump said at a White House briefing on Monday that a vaccine may be ready in October. Democratic presidential nominee Joe Biden, meanwhile, said he would heed the advice of scientists about whether to get a coronavirus vaccine if one were to become available before November’s presidential election.

New York reported that the state has had an infection rate below 1% for 31 days.

India, the world’s new Covid-19 epicenter, surpassed Brazil as the second-worst hit country. The nation’s virus curve is showing no signs of flattening out, with infections rising at a record pace of more than 90,000 a day.

The U.S., India and Brazil account for more than half the world’s cases, which have now topped 27 million. While U.S. cases steadied, governors across the country urged citizens to be cautious during the Labor Day holiday weekend. Australia warned of mounting economic pain as Victoria state announced only a gradual easing of its lockdown.

Subscribe to a daily update on the virus from Bloomberg’s Prognosis team here. Click CVID on the terminal for global data on coronavirus cases and deaths.

Netflix co-CEO Reed Hastings said he doesn’t see any positives from working from home. In an interview with the Wall Street Journal, he said he expects the five-day work week will become four days in the office while one day is virtual from home.

Turkey reported 1,703 daily cases on Monday, while the death toll was 57. Both figures represent the highest levels seen since mid-May. Ankara, the capital, leads in the number of daily cases, Health Minister Fahrettin Koca said via Twitter.

The National Hockey League completed its sixth week of its Phase 4 Return to Play with no positive Covid-19 test results among the 2,534 administered, according to a statement.

France reported more than 4,000 new coronavirus infections on Monday, with the average pace of daily cases over the past seven days continuing to climb.

Laboratory-confirmed cases rose by 4,203 to 328,980, bringing the increase in infections in the past week to 47,955. The seven-day rolling average of new cases has been climbing steadily for three weeks to the highest since the start of the outbreak.

Irish health authorities are “monitoring with growing concern” increasing coronavirus cases in Dublin, the nation’s chief medical officer said, with the next seven days now “vital” to controlling the virus in Ireland’s capital. The warning comes two days after Ireland reported its most new cases since May.

The total number of infections reported Monday, which included adjustments for older cases, was 525,549, while 237 people died over the past seven days.

The review committee will start evaluating the WHO-coordinated international health response to Covid-19 on Sept. 8, Director-General Tedros Adhanom Ghebreyesus said at a briefing. It will recommend any changes it believes are necessary, and may present an interim report in November.

Separately, a number of studies are showing that the antibody response lasts and stays strong for a certain number of months — though it’s not known how long that robust immune response lasts because the pandemic has only been going on for eight months, according to Maria Van Kerkhove, the group’s technical lead officer on Covid-19.

“Out of more than 26 million cases, having some case reports of reinfection tells us that this is possible, but it doesn’t tell us what’s happening at a population level,” she said.

The European Commission said it is close to reaching an agreement with BioNTech SE on the supply of any successful Covid-19 vaccine. “We are almost there,” Sandra Gallina, a senior health official at the commission, the 27-nation European Union’s executive arm, told a European Parliament committee on Monday in Brussels.

Gallina also said the EU expects to receive some doses by the end of the year, citing vaccines being developed by AstraZeneca Plc, Moderna Inc. and BioNTech.

The state said the positivity rate was 0.88% on Sunday, with 520 additional cases and two deaths.

An additional 2,948 cases of coronavirus were recorded in the U.K. on Monday, the second day in a row that nearly 3,000 cases were added.

U.S. President Donald Trump says “starting to get VERY high marks in our handling of the Coronavirus (China Virus), especially when compared to other countries and areas of the world,” in a Tweet.

Denmark is re-introducing a number of coronavirus-related restrictions following the worst spike in infections since the height of the pandemic.

The limit on public gatherings is reduced to 50, from 100, while bars and restaurants will have to shut by midnight, Danish Health Minister Magnus Heunicke said. The announcement follows more than 1,000 new reported cases in the Nordic country over the past week. The new infections appear to affect mostly young people in their 20s, officials said.

Germany’s Paul-Ehrlich-Institut approved the German part of BioNTechand Pfizer’s phase 2/3 study with coronavirus vaccine candidate BNT162b2, according to a statement.

The region plans to work on a new roadmap for the introduction of the new currency, Nigerien President Mahamadou Issoufou said at a meeting of regional heads of state.

Malaysia reported the highest daily increase in coronavirus cases since June, mostly due to local transmissions in the Borneo state of Sabah. The country confirmed 62 new cases on Monday, the most since June 4. The government has largely eased movement restrictions since early May, when it allowed most industries to reopen, followed by further relaxations in June.

Covid-19 patients have active and prolonged gut viral infection, even in the absence of gastrointestinal symptoms, scientists in Hong Kong showed. The coronavirus may continue to infect and replicate in the digestive tract after clearing in the airways, researchers at the Chinese University of Hong Kong said in a statement Monday. The findings, published in the medical journal GUT, have implications for identifying and treating cases, they said.

The U.K. is seeking to avoid national lockdown “at all costs,” Environment Secretary George Eustice told Sky News on Monday after the country reported almost 3,000 new coronavirus cases on Sunday, the highest since May. While he wouldn’t rule another lockdown, he said the emphasis now is on testing and tracing contacts of positive cases, and responding to flare-ups with localized measures.

Hungary registered a daily record of 576 new cases, bringing the official active case count to 4,377 in the country of nearly 10 million, the government’s task force said on Monday. In reality, the number of cases is closer to an estimated 100,000 because of Hungary’s relatively low rate of testing, according to Bela Merkely, who advises Prime Minister Viktor Orban on virus policy.

The International Olympic Committee’s Vice President John Coates said the Tokyo Olympics will go ahead next year regardless of the coronavirus situation, AFP reported.

Virus experts have warned that the Olympics were unlikely to happen even in 2021 as the pandemic won’t be contained in time. Speculation the Games will be canceled had increased after IOC members hinted at that possibility to various media in May.


Illuminated Olympic rings float in the waters off Odaiba island in Tokyo, Japan, on Monday, June 8, 2020.

Singapore will allow larger exhibitions and conferences with up to 250 participants to take place, an increase from the current maximum of 50, as the country continues its gradual reopening.

The Philippines will meet with Australian manufacturers for a Covid-19 vaccine being developed by the University of Queensland as the Southeast Asian nation expands its search for supplies to combat the region’s biggest outbreak.

India, the world’s new Covid-19 epicenter, surpassed Brazil as the second-worst hit country. The country’s virus curve is showing no signs of flattening out, reporting more than 90,000 cases for a second day, as the pandemic threatens to overwhelm an already-overworked health-care system.

India has fast become the world’s new virus epicenter, and experts predict it will ultimately surpass the U.S. as the worst outbreak globally.

Unlike the U.S. and Brazil, India’s case growth is still accelerating seven months after the reporting of its first infection on Jan. 30. The pathogen has only just penetrated the vast rural hinterland where the bulk of its 1.3 billion population lives, after racing through its dense mega-cities.

South Korea added 119 more cases in 24 hours, down from 167 a day earlier, according to data from the Korea Centers for Disease Control & Prevention. The new cases are the fewest in three weeks, as infections remained below 200 for a fifth day.

Singapore identified three new clusters of foreign-worker dormitories that are linked to earlier Covid-19 cases, the Ministry of Health said in a statement. That brings to 12 the number of clusters found in the last week in dormitories previously declared clear of the virus, the Straits Times reported.

Australia’s government warned of mounting economic pain as Victoria state announced only a gradual easing of its coronavirus lockdown that will see retail, hospitality, tourism and entertainment under tight controls across Melbourne until at least the end of October.

The 5 million residents of the state capital will face restrictions on when they can leave home until Oct. 26, or until there are fewer than 5 new Covid-19 cases a day. Office staff will be told to work from home until at least Nov. 23, under the roadmap announced by state Premier Daniel Andrews.


Pedestrians cross a quiet Bourke Street in Melbourne on Sept. 6.

Georgia became the 10th state to surpass 6,000 deaths on Sunday, reporting an additional 60 fatalities. The total death toll is 6,037.

Governor Brian Kemp, who faced criticism for an early reopening and for suing localities to prevent mask orders, toured the state on Friday warning Georgians to keep safe over Labor Day weekend.

New York University has suspended more than 20 students for violations of rules to curb the spread of the coronavirus, the school announced on Twitter.

Colleges and universities around the country are struggling to rein in outbreaks since the start of classes this year — and some are turning to punishments. Northeastern University in Boston dismissed 11 freshmen late last week and did not refund their $36,500 tuition, the university said.

Gallery: How America and other countries bounced back from the last global pandemic (Lovemoney)

Skills lost due to COVID school closures will hit output for generations: OECD

Wed Sep 9 , 2020
FILE PHOTO: A child marches down Court St to protest the opening of schools following the outbreak of the coronavirus disease (COVID-19) in the Brooklyn borough of New York City, New York, U.S., September 1, 2020. REUTERS/Carlo Allegri PARIS (Reuters) – Disruption to schooling stemming from the COVID-19 epidemic will […] 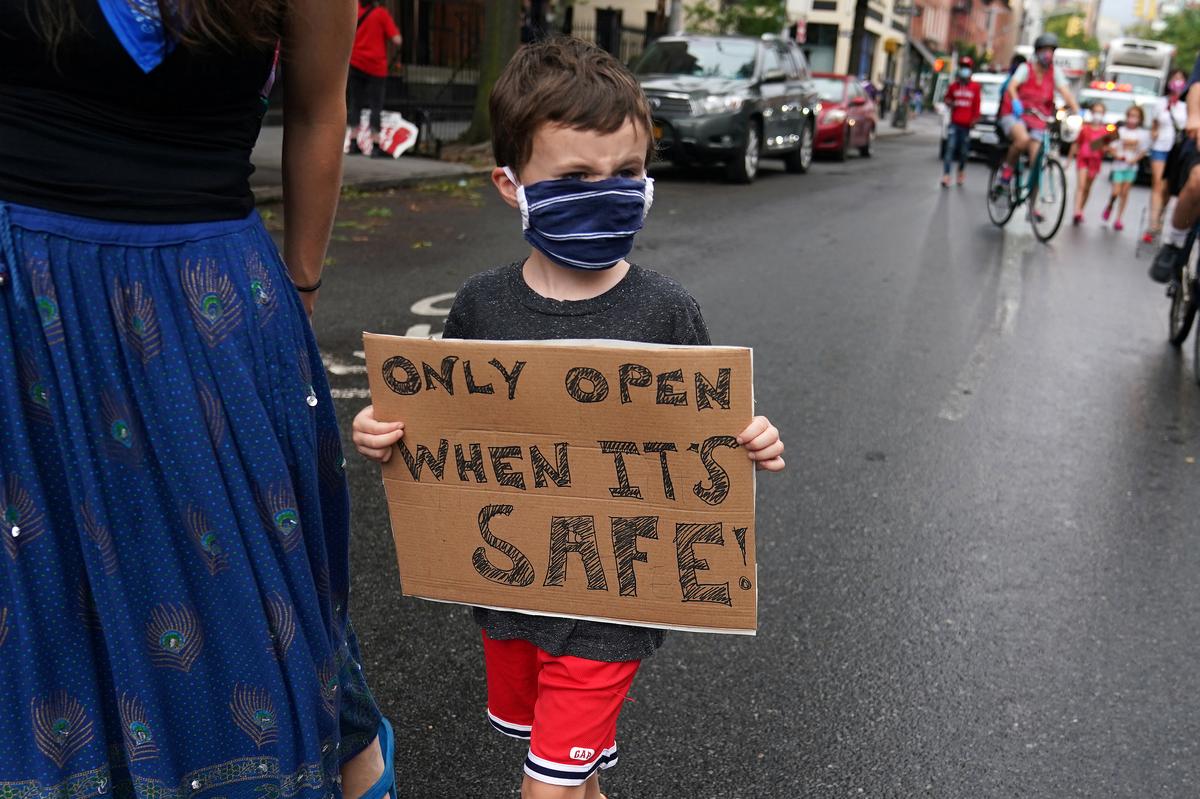