Bracken Darrell, Logitech CEO, joined The Final Round to discuss the surge in demand for computer tech as more people work from home indefinitely and his outlook for the tech sector heading into the end of the year.

SEANA SMITH: Welcome back to “The Final Round.” Well, work from home equipment is still hard to find as companies struggle to address supply shortages. Well, Logitech, it’s one firm that’s been working nonstop to try and keep up with demand. So for more on this, we want to bring in Logitech’s CEO. We have Bracken Darrell joining us now to discuss all this. And Bracken, I know your stock has been on a tear. Shares up more than 60% this year. Now, we’re in this back to school season. I took a look at your website earlier today. You’re still out of stock on a number of your products, so how are you adjusting these shortages, and how have you attempted to keep up with the demand that you’ve seen over the last six or seven months?

BRACKEN DARRELL: Well, we’ve just got up every route to unlock new supplies. So we’ve been working nonstop for the last, really since March, to unlock new supply in both in components and in manufacturing capacity. And, you know, we’ve made a huge amount of headway, but it’s probably going to be tight, right, through the end of this quarter.

SEANA SMITH: It’s going to be tight. Just where are there, are there supply shortages elsewhere? Are you having trouble getting your products to– I mean, where is the breakdown occurring?

BRACKEN DARRELL: Yeah, it’s really mostly, for us now, it’s mostly component shortages. We’ve unlocked our own ability to assemble a very large number, and we’re, now we’re unlocking the component supply we need to be able to put the parts together. But we’re getting there. You know, we’ve really increased the supply dramatically, but it’s still super strong.

AKIKO FUJITA: Bracken, where are your cameras manufactured primarily? And we’ve seen so much of what happened in the early days of this pandemic, companies not able to access supply lines that were outside of the US, not being able to export them in. Has that been part of the problem for you too?

BRACKEN DARRELL: Not really. You know, in the very early days, you know, we manufactured in Asia and China, just outside of China. But in the very early days, you know, back in January or February, we had the same problem most people did where, you know, China just completely shut down in the early days of the pandemic. But that opened up, took us a few months to get back. We’ve been pretty much at full production since then. It’s really not been– and we’ve had to airfreight things– but it’s really just been about making the physical products, and we’ve increased our supply [INAUDIBLE], and we’re going to keep doing it.

RICK NEWMAN: Hey, Bracken, Rick Newman here. I am coming to you live on a Logitech camera that is made in China, which I was lucky to get right before they all disappeared from the stores in March. I’ve been following the trade war with China, which was a big issue before the pandemic set in. How has that affected you? Where does that stand? We sort of got this uneasy truce with the so-called phase one trade deal, and President Trump saying he wants to bring more manufacturing jobs back to America. Has that happened in your at your company at all, and do you feel like trade with China is stable now or you’re anxious about it?

BRACKEN DARRELL: You know, we’re always keeping an eye on it, of course, but our ability to move things in and out of our manufacturing sites goes back about 35 years. We are a 40-year-old company. We make about half of the things on our own. We [INAUDIBLE] in our own factories. We contract make them in other people’s factories in other cases, so we’re used to being able to move things in and out on a regular basis, so we’ve been able to manage really well through the trade disputes, and I expect we’ll be able to do something if they keep bubbling up and changing.

SEANA SMITH: Well, Bracken, if they do keep bubbling up and there isn’t any sort of resolution, or more of a resolution here going forward, would you rethink your pipeline at all? Would you rethink some of the products that you’re getting out of China and look elsewhere for them?

BRACKEN DARRELL: Well, we’ve already redistributed some of our manufacturing outside of China. So we’re in China and we’re out of China, and we’ll keep being flexible about where we manufacture things. It’s fundamental to what we do, so we have to be.

SEANA SMITH: Bracken, the skyrocketing demand that you’ve seen over the last several months, obviously, this is something which I think that you’ve probably seen before, but how are you gauging future demand? Are you viewing this as a secular trend, and is this something that you think may not be sustained at these current levels, which are just astronomical, but how are you planning for six, 12, 18 months from now?

BRACKEN DARRELL: Well, you know, the cool thing about our business is we were really well positioned in kind of four secular long term growth firms. Video Everywhere, like we’re doing now, where there’s a webcam or a conference cam. Working from anywhere, with your desktop going anywhere, including to home, obviously took off. Gaming, the rise of esports, and then the people, the democratization of people creating content for things like Instagram and Twitch.

RICK NEWMAN: Hey Bracken, you’re obviously, your products are available in all retail venues online and in stores, and we’ve obviously seen this big shift to online. Do you detect trends in the way people are getting your products that are likely to remain intact even once we get to the other side of COVID?

BRACKEN DARRELL: Yeah, for sure, Rick. You know, back about five years ago, we were in China selling through something called IT balls, which one day suddenly just kind of disappeared and everything went online. We went from 13% online to 70% online in about a year. I think the same things happening around the world now. I think it’s not an IT ball, and now it’s retail space. And I think you’re going to see just this long term shift is happening short term to more and more online. So I don’t know what the percentage will be, but it will be very high, so will online. We’re in it for good.

ANDY SERWER: I’m sorry, Bracken, let me ask you, you talk about positioning the business to benefiting from this COVID environment, inadvertently, but you are. But the stock is, you know, you’re part of one of those boom, you’re a stay at home trade stock a little bit, and the stock has way more than doubled since the low in March. And I’m curious, you know, what do you tell investors, what does your IRR department do when, you know, your stock goes from 33 to 75? And, you know, does that change how you communicate to shareholders and what you say to them?

BRACKEN DARRELL: Well, not really, because I’m a very long term person. If you went back and looked at, you know, went back before March and our stock chart went to the day that I started, we were worth about a billion dollars, and now, we’re worth 12 billion. So we’ve been steadily kind of doubling the value of the company every three years, and this is the latest round.

And so we’re super long term in terms of what we look at. We have an elastic strategy. We’re sincerely entering new categories. We’re aggressively innovating into the ones where we are, so I fully expect to keep growing long term. If you’re a long term investor, you know, we want to be on the option list.

RICK NEWMAN: Hey, Bracken, what is the next big thing around the corner, something that is on your radar, but maybe not on ours?

BRACKEN DARRELL: You know, we don’t usually divulge anything that’s kind of top tier going out there. The next big thing is really happening now, which is, you know, all the categories we’re in are really in these long term secular acceleration trends now. So it’s super tight.

SEANA SMITH: You can’t give us anything? Not one thing?

BRACKEN DARRELL: [INAUDIBLE] I’ve got the next big thing right next to me, but I can’t show you.

ANDY SERWER: All right, there we go, we got it. Got it [INAUDIBLE].

SEANA SMITH: Hey, Bracken, real quick. Just how does it– we had a gaming executive on the show yesterday talking about the surge that we’ve seen in gaming. How much of that is part of your business, and where do you see that just in the future trajectory of that side of your business going?

BRACKEN DARRELL: Well, I mean, we just love gaming. We love esports. We love gaming. We started in this [INAUDIBLE] about seven or eight years ago, and it’s gone from a, you know, kind of $50, $60 million business to a $700 million business for us, and I fully expect gaming will be bigger. You heard it here, maybe not first, but one of the people saying it, I think esports will be bigger than traditional sports over time. And so this is on a super long term exciting growth trend. We’re in the middle of the action. We’re the leader in peripherals, and we’re going to keep investing and doubling the outback.

SEANA SMITH: All right, Bracken Darrell, great to have you back on the show, CEO of Logitech, we hope to see you soon.

Thu Sep 3 , 2020
Highlighting the importance of Indo-Canadian S&T cooperation, DST Secretary Ashutosh Sharma said it should be explored as to how the cooperation can be taken to a different level. India and Canada discussed ways to ramp up cooperation in science and technology by strengthening existing international connections, sharing best practices, and […] 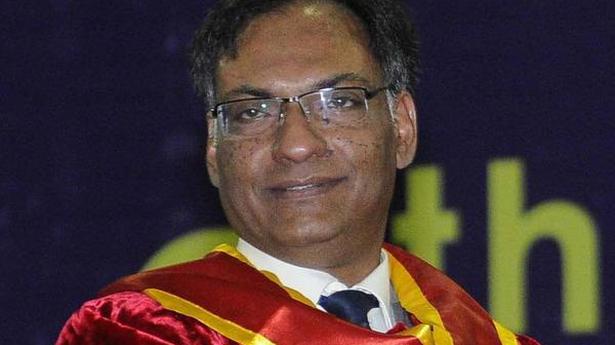