As it stands, starting in January, virtual students will be funded at just 85% of the rate of an in-school student if that student attends school in-person less than half the time.

Gov. Eric Holcomb earlier this month said he would ask the Indiana State Board of Education to call a special meeting to delay the fall count of student enrollment, known as the Average Daily Membership, through at least December. That count is used to set new funding levels for schools.

Center Grove schools, the county’s largest district, stands to lose the most of any Johnson County school district if the current funding formula is used. The district shifted from full-time in-person learning at its high school and two middle schools this week after the school district reported 316 COVID-19-related student absences, a combined number of students who were exposed to people with COVID-19 and students who developed symptoms of the virus. Students at the high school and two middle schools are learning remotely this week, and for at least the next two weeks, will learn in school just two days a week, school officials said.

If the 3,214 students at the three schools continue to learn virtually three days a week until student count day, the district could stand to lose more than $2.8 million in funding, along with about $1.1 million due to the 1,252 students who chose to learn virtually full time this semester.

After conversations with Sen. Rodric Bray, R-Martinsville, Center Grove schools Superintendent Rich Arkanoff said he is hopeful the funding formula will be amended.

“I just met with two legislators and had conversations,” Arkanoff said. “Sen. Bray called me and I feel our local legislators are working really hard to rectify (the funding situation). I’m hoping they follow through and make that happen.”

Bray sparked the outcry about school funding after he sent a letter to school leaders that said there’s “no guarantee” schools that choose not to resume any in-person classes due to pandemic health and safety concerns will receive 100% of their expected per-pupil funding.

Arkanoff, along with Clark-Pleasant schools Superintendent Patrick Spray said it is too early to speculate what both school districts would have to cut if they lost a portion of their funding.

Although all Clark-Pleasant students have the ability to go to school five days a week, about 20% of the student body — or about 1,300 students — have opted to learn virtually this semester, which could result in about $1.2 million in funding losses under the current formula, Spray said during a school board meeting Aug. 18.

“We just continue to have conversations with legislators,” Spray said. “The will is there. It’s just a matter of figuring out how.”

While legislators want to ease uncertainty among educators, it is best to wait until the next legislative session in January to discuss any possible changes, Gov. Eric Holcomb said earlier this month.

“We’ll have the benefit of knowing, having been informed by the lay of the land, the facts as they are on the ground come the end of the year. I’m looking forward to having that discussion next year especially should I be (re-elected),” Holcomb said.

“I want to make sure, as educators, faculty and superintendents are going back into session, that they don’t have this uncertainty hanging over their heads. Our leaders agreed that in the House and Senate they wanted to have that certainty.”

As is the case with Center Grove schools, Franklin schools could lose 15% of funding for all its high school and middle school students, as those students are going to school two days a week. The district could lose more than $650,000 for its virtual students alone, with a more than $2 million funding loss in its middle and high schools.

Those losses would likely result in personnel cuts if it came to fruition, said Tina Gross, chief financial officer for Franklin schools.

“It’s probably safe to say we would have to lose people. It’s a huge hit either way,” Gross said. “Right now, we’re strictly surviving from COVID.”

The almost $2.7 million funding loss would equate to roughly half of the district’s $5.4 million savings, she said.

“That affects our ability to react to emergencies,” Gross said.

Franklin schools Superintendent David Clendening has been in contact with local lawmakers about the potential impact of funding cuts, Gross said.

“Clendening has been in constant contact with our representatives and people who have influence over these decisions,” Gross said. “We’ve been encouraged to talk to our legislators, shed some light on it and communicate the negative impact this would have on the school year. We’re just trying to keep students safe.”

The 15% funding cut for virtual students could translate to more than $470,000 of losses for Greenwood Community Schools, which would have a significant impact on Greenwood schools, said Kent DeKoninck, superintendent.

“That would significantly impact us if we only had 85% funding,” DeKoninck said. “We’re not prepared to talk about (cuts) at this time, but it would be treated as any downturn. We would have to evaluate what that impact would be.”

A potential loss of about $126,000 for Indian Creek schools is concerning, said Tim Edsell, superintendent.

“It’s a great concern if that were to take effect, losing that much money,” Edsell said. “$126,000 would be two or three teachers. I’ve reached out to local legislators and expressed concern to them, and they said they’re working on it.”

Edinburgh Community Schools, which could lose almost $100,000, would be faced with potential cuts to educators’ wages and benefits, said Doug Arnold, superintendent.

“Losing nearly $100,000 has a dramatic negative impact upon our school corporation,” Arnold said. “This impacts our education fund which pays for wages, salaries and benefits.”

Here’s how much each school district would stand to lose if students going to school in-person less than half the time get 85 percent of standard funding:

Sat Sep 12 , 2020
Technavio has been monitoring the smart education market and it is poised to grow by USD 117.71 bn during 2020-2024, progressing at a CAGR of almost 19% during the forecast period. The report offers an up-to-date analysis regarding the current market scenario, latest trends and drivers, and the overall market […] 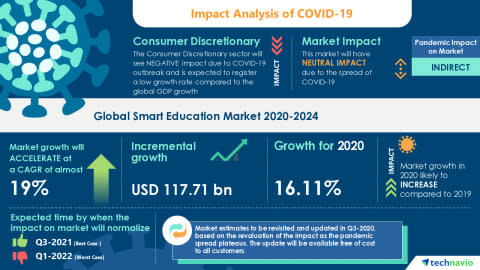