Ohio school districts are spending hundreds of thousands of dollars more this year on cleaning supplies, additional personnel and technology to deal with the coronavirus.

Moving quickly from desk to desk, head custodian John Phelps directed the nozzle of his electrostatic backpack sprayer toward an empty student chair.

With a squeeze, a burst of the electrically charged disinfectant coated the back rest and began working to destroy hidden germs.

Phelps then made his way along the classroom walls, targeting the handles on the cabinets, the ledge of the whiteboard, the light switches and anywhere else Glenwood Intermediate student fingers may have touched earlier that day. He was finished in roughly 2 minutes.

Stay informed on the latest coronavirus news. Find our complete coverage at Dispatch.com/topics/coronavirus.

Without the backpack sprayer, Phelps and the Plain Local School District’s other evening custodians would have been pumping spray bottles by hand to disinfect every surface in the 54-classroom building.

“This makes a world of difference,” Phelps said. “It’s a lifesaver.”

A survey of more than two dozen school districts across Ohio shows the automatic disinfectant sprayers were one of the hottest purchases this year as school leaders increased their cleaning protocols to follow federal, state and local health guidelines for reopening their buildings during the coronavirus pandemic.

The survey, conducted by reporters in the USA TODAY Network, shows districts expect to spend on average of $129 more per student this school year due to the additional precautions, equipment and personnel.

In Stark County, schools expect to spend an average of $135 per student on additional COVID-19 precautions, personnel, equipment and technology.

Kathy Jordan, treasurer for the Plain Local School District in Stark County, said she would rather the district spend the money to provide the safest possible school environment than not offer an in-person option at all. More than three-fourths of Ohio’s traditional public school districts are offering some type of in-person class option.

“It’s all worth it,” said Jordan, whose district of 6,100 students has spent $475,225 on additional COVID-19 precautions, personnel and technology. “We’re putting in everything we have to (in order) to keep kids and staff safe. That’s what we committed to. It’s hard to quantify the entire cost, but whatever it is, we’re going to do it. We want the kids to be here and to be safe and healthy and have a clean environment.”

Where did the money go?

Estimates by national education associations predicted that expenses would be far higher for school districts reopening with in-person classes.

An analysis by the School Superintendents Association and the Association of School Business Officials International in June estimated that an average school district – defined as 3,659 students, eight school buildings, 183 classrooms, 329 employees and 40 school buses transporting at 25% capacity – would need to spend an additional $1.78 million, or $486 per student, to follow the safety protocols needed.

The American Federation of Teachers’ financial analysis put the cost to return even higher – estimating an additional cost of $2,300 per student.

Both groups included expenses for before- and after-school child care that the Ohio school districts surveyed aren’t providing, and for additional personnel that most of the districts haven’t yet decided to hire.

While all the districts surveyed reported increased costs due to additional cleaning supplies and protective barriers, it was the expense to provide online learning for those students not comfortable with face-to-face classes that has significantly boosted costs.

For example, Canton City Schools, the largest school district in Stark County with more than 8,000 students, expects to spend $617,400 on iPads for its remote learners. Brown Local in Carroll County, which has 600 students, spent $20,800 on an additional online learning software license to handle the increased number of students taking digital classes.

Jackson Local Schools in Stark County has spent $286,072 – more than half of the $404,811 it expects to spend on COVID-19 precautions – to purchase laptops for teachers to help them facilitate the district’s eLearning option, in which students will be taught online by the same teachers the students would have had if they were in class. Jackson also is offering its 5,808 students the choice of attending in-person classes or an online academy.

Mason City Schools in Warren County also gave its families the option to learn online or to attend classes in person. But, unlike many schools, the district of 1,335 students has designated 130 of its teachers as online instructors/supporters/coaches.

School treasurers across Ohio are now trying to figure out how to squeeze these new expenses into their budgets, many of which have been significantly cut by the governor as he deals with the state’s own financial shortfalls due to the coronavirus pandemic and the roughly two-month shutdown of all nonessential businesses. Most treasurers will be presenting an updated operating budget to their school boards for approval in September.

They’ll likely be calculating their estimates without knowing how much state funding they will receive this year. Most treasurers are operating on the assumption that their budget will be cut by the same amount as last year, but nothing has been announced. The treasurers also don’t know whether more relief funds are on the way.

The Ohio Department of Education has distributed more than $657 million in federal coronavirus relief funds so far to Ohio schools and educational service centers. The department still has more than $86 million to distribute from the Governor’s Emergency Education Relief fund, but that fund is for educational service centers, county boards of developmental disabilities and Ohio’s schools for the blind and deaf, according to the state Education Department.

Without additional relief funding, nearly all of the districts surveyed will need to dip into their revenues to offset the increased reopening costs and the loss of state funding.

Of the more than two dozen districts surveyed, only three districts – Canton City, Marion City Schools and Middletown City Schools – are expected to see a net gain in revenue from the relief funds, school estimates show.

Middletown City Schools officials in Butler County say they are bracing for more revenue challenges, including lower Ohio Lottery revenue, reduced real estate taxes and decreased athletic gate receipts due to the state’s spectator restrictions. Other treasurers noted that their cafeterias lost revenue due to the spring shutdown because students weren’t buying lunches, and their building rental revenue is nearly nonexistent due to the pandemic.

Superintendent Cooper with Mason City Schools believes lawmakers need to prioritize funding for schools if they want the economy to fully reopen.

“Schools have to open,” Cooper said. “That’s the No. 1 topic across this country. And the reason they have to open is because it’s part of the scaffolding that allows the economy to move forward. We got our budget cut drastically, and we’re being asked to do even more to keep everyone safe. How is it that they can say, ‘It’s so important to the economy that you open, but we’re going to cut your budget.’”

He said districts such as Mason, where COVID-19 precaution expenses and state funding cuts exceed the coronavirus relief funds by $5.6 million, can’t expect residents to shoulder more of the burden. Mason voters recently approved a 9.96-mill levy, but the state’s estimated $4.3 million funding cut and the district’s projected $2 million in additional coronavirus costs already has gobbled up the revenue generated by three of those mills.

“Voters did that (passed the levy) trusting that we were going to make those dollars last as long as we can without coming back to them and asking for more money anytime soon,” Cooper said.

Contributing to this story were Terry DeMio and Amber Hunt of the Cincinnati Enquirer; Valerie Royzman from The Daily Record in Wooster, Micah Walker of The Marion Star and Megan K. Henry of The Columbus Dispatch.

Mon Aug 31 , 2020
A federal judge late Wednesday granted the state of Michigan a preliminary injunction in its lawsuit against U.S. Secretary of Education Betsy DeVos over the distribution of funding to schools under a federal coronavirus relief package. The federal Coronavirus Aid, Relief, and Economic Security, or CARES, Act allocated $13 billion […] 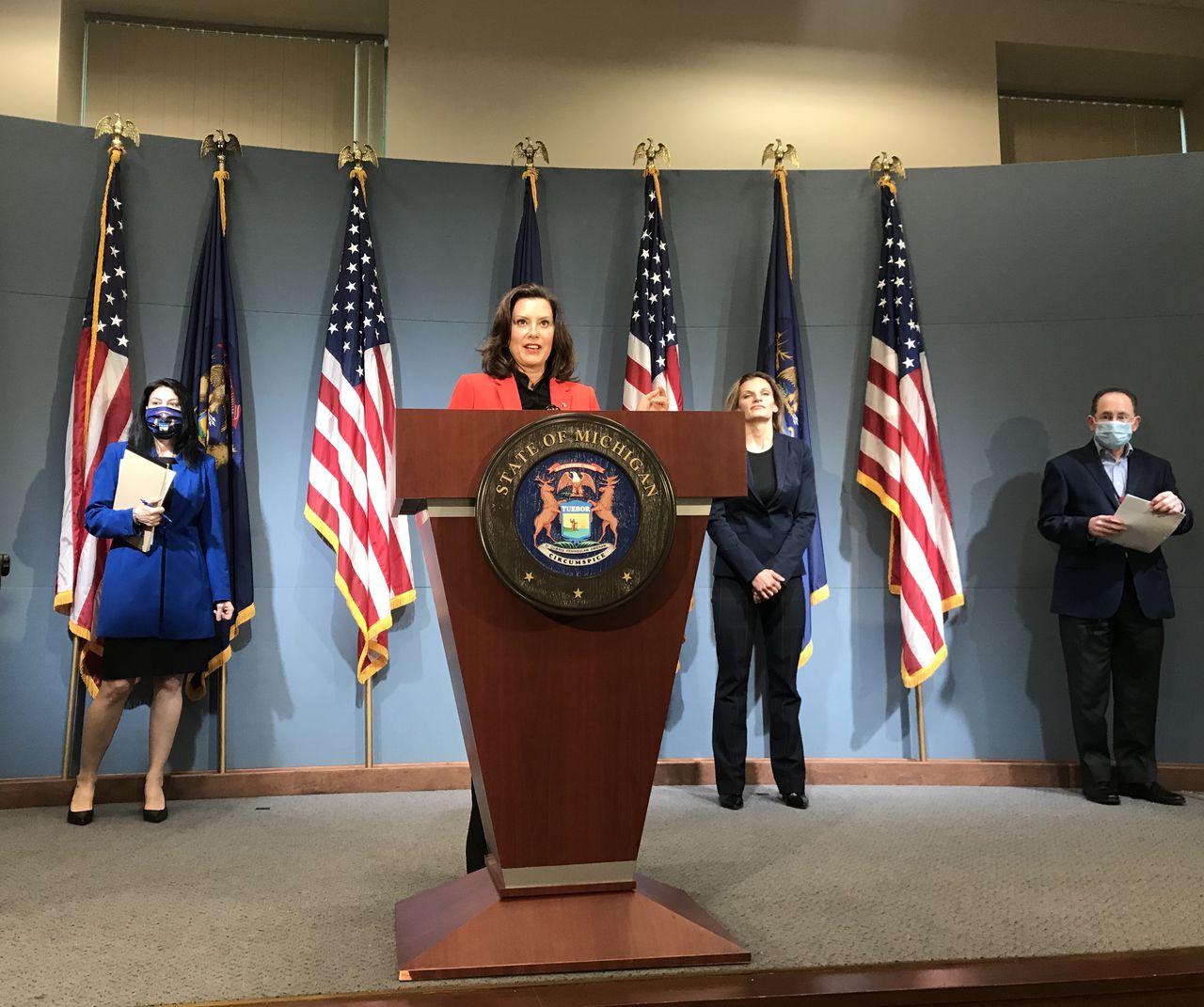