FAIRFAX COUNTY, VA — When it comes to politics, it’s probably safe to say most people are currently focused on the 2020 election. But, some candidates are already looking ahead to November 2021, when Virginia voters decide who will be the next governor, lieutenant governor, and attorney general.

Perryman, who is also the director of social impact policy and counsel at Internet Association, announced his candidacy at the end of July. In his brief time as a candidate, he’s already racked up a number of endorsements from community leaders, activists, and Virginia politicians, including Del. Kaye Kory (D-Fairfax) and Chad Martin, vice mayor of the City of Martinsville.

Perryman sat down recently with Patch to discuss why he decided to run for lieutenant governor and why he thinks he’s the right person for the job.

PATCH: What made you decide to run for lieutenant governor?

SEAN PERRYMAN: I started to run because I felt that in this pandemic, a public health crisis that we weren’t serving people in Virginia or really anywhere well. The government wasn’t stepping up in this moment. As someone who’s worked in the community, I especially saw the impact that it had on minority owned businesses on parents, on really just every facet of our society. That was the first time I thought about running. And once I saw the incident with George Floyd and a lot of our state delegation didn’t seem to understand the urgency of the issue or much about criminal justice reform, it really motivated me to step up and run myself, so that I could be a voice and an advocate for the community.

What is your stance on police reform? What do you see as priorities, if you were to become lieutenant governor?

I’m running on three E’s — education, equity and economics. The equity piece would address a lot of things and I think with the police reform issue specifically. We need to make sure that we’re inserting accountability into the system and transparency. Those are the hallmarks of good government, so this isn’t some radical agenda. It’s about making sure that, as so many police officers say, that there are a few bad apples, that we have mechanisms in place to hold those bad actors accountable.

Could you expand a little bit on the other two E’s, education and economics?

One of the things I see as we invite more and more tech companies into Northern Virginia, we need to talk about educating our workforce. There are plenty of programs, especially at boot camps, where you don’t have to take on a ton of debt. You can get skills that will prepare you for some of these high-tech jobs. That’s something that we need to start thinking about in rural Virginia, in Hampton Roads, and in the communities where we need to get people back to work.

If I were to win and become lieutenant governor, it’s really going to depend on are we living in a world with a vaccine or without a vaccine. If we don’t have a vaccine, the education piece is going to be critical. One of the things that we need to make that happen is better internet access throughout Virginia, especially in rural and urban areas where there isn’t the financial incentive to have better broadband access through the private sector.

When we’re seeing the state coffers being reduced by so many hundreds of millions of dollars, we need to start creating new tax revenue. We can do that through legalizing cannabis, which is not only an economic issue, but an equity issue because of the way it’s enforced currently. Then we take that money and put it into early childhood education. I would like to see universal pre K. I think we could do that by legalizing cannabis or creating that sort of new industry. This also creates new jobs and early childhood education as well as in the cannabis field. That’s sort of a big idea, but I think it’s one that we should definitely invest in and any sort of legalization would have to also come with freeing the people who are currently incarcerated for that crime.

What makes feel that you’re qualified to be lieutenant governor?

There have been plenty of lieutenant governors, including current ones, who haven’t been elected to office before. I don’t feel at a disadvantage or that I’m doing anything particularly brand new by running as a first-time candidate for lietenant governor. I’ve spent my life working in policy here at Fairfax. I’ve been leading some of the criminal justice reform, leading on education issues here locally in the biggest county in the state. In my professional role, I’ve been a lawyer now for 10 years and I’ve counseled members of Congress. I worked for Congressman Elijah Cummings on the House Oversight Committee, where I counseled Democrats on issues like emerging technology and led investigations.

I work in tech policy where I take on and am seen as an expert on many of these issues of tomorrow, whether that be artificial intelligence, facial recognition, or internet connectivity. So I think I have the right set of skills, both at the community advocate, who’s worked with the community, work on the issues of education, criminal justice reform, police reform. … I look at those as my skills that I bring to the table. And then, I do have executive experience in the sense that I led the largest NAACP chapter in the state. It’s one of the most active nonprofits in the criminal justice arena and we’ve only grown under my leadership. So I think I bring those experiences and knowing the community to the position.

You’re not the first candidate from Northern Virginia running for a statewide position. What would you say to the people downstate that you can do for them?

Because I’m looking at it from an equity standpoint, many of the issues that I’m going to champion are going to benefit them. When I look at Fairfax County, for instance, during this pandemic, not only are we doing virtual, but we’re able to give each kid a laptop if they needed it. That’s not the case in many other jurisdictions. When I talk about internet connectivity, that is a rural Southwest Virginia issue. When I talk about the jobs in the tech sector, that’s the Southwest Virginia issue. When I talk about environmental issues like the pipeline and the environmental damage, those are mainly happening in other parts of Virginia. A lot of my campaign is centered on those folks, because I know what it’s like to have politicians who don’t speak for you. Even though I’m here in Northern Virginia, I feel that, so much of our political class is catering to someone else other than the constituents who want to see these sort of reforms. And I feel that when I speak to people in Southwest Virginia, they often get overlooked, but that would not be the case if I were to become lieutenant governor.

It’s still early days in the 2021 campaign, but you’ve already garnered a number of endorsements from community leaders, politicians, and activists. What do you think that says about your candidacy?

I think it shows that we have momentum, and I think it shows that people trust that. The reason that the people were willing to endorse me is because they’ve seen the work that we’ve been doing over the years. Even though I’m the president of the Fairfax County NAACP, I’ve been working throughout the state to form coalitions. During the COVID crisis, we formed a coalition to come up with criteria for safe reopening. We’ve formed coalitions on taking the money from the SRO [school resource officers] programs, especially during this virtual environment and putting it towards counselors at school. … I worked with Del. Kaye Kory on that initiative and she endorsed me last week. So I think both elected officials and activists, they see that I’ve been doing the work in the community, that I’m consistent, and that I’m going to put those issues first. More importantly, I’m going to champion them and then go to the mat on each one of those issues. So I think that record is what people are excited about.

What else would you want people to know about you?

I would want people to know that I had this background in tech policy and that many of the solutions that we’re looking for are going to be tech based. I’m someone who speaks on these issues, both at home and internationally before COVID of course. Artificial intelligence is an issue that’s going to touch on pretty much every segment of our society and I’m someone who’s been thinking about those issues and thinking about how we can do those in a more equitable way. … A lot of these other candidates are going tell you, ‘I’ve been a delegate for X years and I deserve a promotion or this is the next logical step in my career.’ That’s not my story. My reason for running is that I’ve been on the ground, helping people throughout this pandemic, whether that’s saving small businesses or feeding hospitals or frontline workers, or just advocating for what we should be doing to better help people. I’ve been on the ground helping folks. The reason I’m running is not about my career, it’s about what I can do to help advocate for people at that level. That’s my sole reason for doing it.

Wed Sep 16 , 2020
The Indian government has denied having any data that can clearly say how many migrant workers lost their jobs to the pandemic. Three members of parliament asked India’s labour and employment ministry today (Sept. 14) “whether the government has done any assessment of the job loss among migrant workers due […] 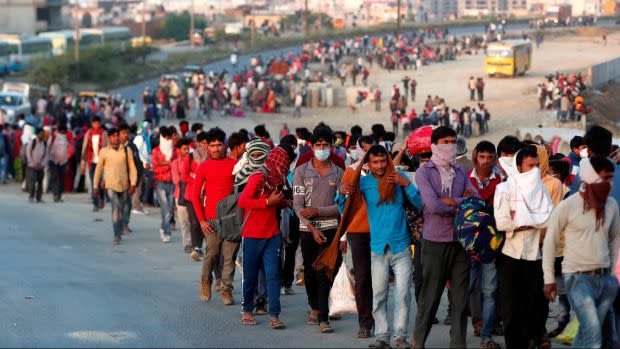