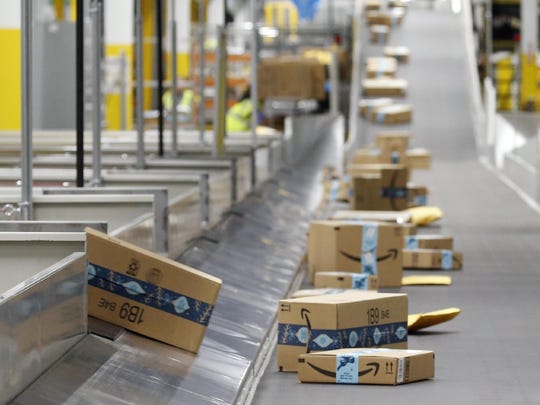 In this December 2019 file photo, Amazon packages move along a conveyor at an Amazon warehouse facility in Goodyear, Arizona. An Amazon delivery station is expected to open in Gainesville at 2121 NW 67th Place by the end of 2020. (Photo: Associated Press file)

Amazon has agreed to build a facility in Sioux Falls, adding 1,000 jobs and $200 million in private investment, as part of a federal grant application for expanding an industrial park in the northwestern corner of the city.

The Seattle-based tech giant joined a combined effort with leadership from the city of Sioux Falls, the state of South Dakota and the Sioux Falls Development Foundation in requesting $1.9 million in funding from the U.S. Economic Development Administration, according to documents obtained Monday by the Argus Leader.

The money would be used to build out and add infrastructure and utilities for Foundation Park, with Amazon signing onto the grant application as a beneficiary.

Amazon told federal officials the company would build a facility that would serve as a hub of activity and economic growth.

“The company will invest in real and personal property for this project,” Amazon Director Holly Sullivan said in a written statement. “This will include construction of the facility, tenant improvements, roadwork infrastructure, material handling equipment, robotics, and more.”

Leadership for the Development Foundation were not immediately available for comment.

Documents show the grant application was a coordinated effort with contributions or consultations from City Hall, the Development Foundation, the Southeastern Council of Governments and a number of state offices including the Department of Environment and Natural Resources, South Dakota Department Game Fish and Parks, and the state historical society.

Sayre Construction is signed on as the contractor for the infrastructure upgrades at the industrial park, with a combined estimated cost of $2.37 million, according to the grant application.

Improvements to the park would include sewer and water, with a 4,450-foot paved road with street lights.

The changes will accommodate Amazon’s proposed facility, which officials describe as a large distribution center with as much as 1 million square feet of space, according to documents sent to the EDA as part of the grant application.

Gov. Kristi Noem said Monday following a speaking engagement in Sioux Falls that she was pleased to see the news about Amazon’s arrival in South Dakota break and she’s eager to be able to talk about the development, which until new hasn’t been able to be talked about publicly due to nondisclosure agreements between those involved.

Her office, she said, has been “heavily involved” in talks with Amazon for months.

“It’s about time. We’ve been waiting for them,” the governor joked during an interview with the Argus Leader. “It’s good news. It’s more jobs — higher paying jobs than some other areas of our economy — and it’s a good opportunity.”

As part of the application, local officials described the pandemic’s effect on the local economy, including Smithfield Foods’ plant shutdown and hour cuts and furloughs by Avera Health.

“Within a week, the presence of the virus in Sioux Falls significantly impacted the operations of two of the city’s top five employers,” Foundation leadership said in the the application. “Countless other businesses in Sioux Falls suffered similar fates.”

This story is developing and will be updated.

Tue Sep 1 , 2020
EWING, N.J.–(BUSINESS WIRE)–Universal Display Corporation (Nasdaq: OLED), enabling energy-efficient displays and lighting with its UniversalPHOLED® technology and materials, announced today the recipients of the UDC Innovative Research Award in Organic Electronics & Display and the UDC Pioneering Technology Award in Organic Electronics & Display. These awards were announced at the […]