“We wanted flying cars, instead we got 140 characters” -Peter Thiel

The closing quarter of the twentieth century was peak tech innovation in the United States. AT&T’s Bell Labs invented the information age with the transistor and data networking, and many transformative technologies tangential to its core business: from solar cells to the Unix operating system to lasers.1 Xerox’s Palo Alto Research Center (PARC) brought about human-computer interaction with the initial computer mouse, as well as laser printing and Ethernet networking.2 In the 80’s Pixar was born, creating the first ever computer-animated sequence in a feature film with novel computer-generated imagery (CGI).3,4 At the same time Gates and Allen were hacking at something special that soon revolutionized computing, as were Wozniak and Jobs.5,6 Amidst the heyday of invention in the world of bits, the “space race” brought about massive innovation and accomplishments in the world of atoms: government competition between the US and Russia put humans on the moon for the first time.

The US tech ecosystem for those decades was a flywheel of sorts7: the government-funded research initiatives provided grass-roots innovation in both academia and industry, which fed an economy that positioned corporate R&D labs towards internal innovations and external spinoffs, and literal moonshots motivated future generations of scientists and engineers.

Multidisciplinary, open-ended R&D coupled with productization goals, all under the same roof, is a corporate R&D model that internally drove long-term value, and externally raised all boats with the tide.

The momentum of this innovation model carried on into the turn of the century. For instance, the DARPA Grand Challenge8 in 2003 set the wheels in motion for engineers across the world to pursue self-driving cars. Or NASA funding commercial space via Space Act Agreements, to support space exploration startups such as SpaceX, Blue Origin, and Astrobotic.9 Yet the US tech innovation model departed in important ways: A growing R&D disconnect between universities focusing on research and large corporations focusing on development, coupled with a mindset shift toward short-term stock value over longer term industry improvements. Case in point, Bell Labs was spun out in 1996 to soon wither away, and the parent company AT&T ceased innovating in any meaningful ways.

Fast-forward to 2020, we observe common threads from the previous flywheel: autonomous driving is an industry in and of itself with market cap expected to grow from $24.1B to $60B in 203010, the global space economy today is a whopping $350B and expected to hit $1T by 204011, and we are on the precipice of a new international “tech arms race”, this time in artificial intelligence (AI). Nonetheless, recent research points to significant downtrends in overall innovation: Bloom et al.12 study a range of industries the past 50 years to find that research effort is rising substantially while research productivity is declining sharply. See the paper for details, but their quantification of “research productivity” shows an approximate 5% decline year over year, in areas such as semiconductors, agriculture, and medical R&D. This is corroborated with National Science Foundation data that indicates the share of research (both basic and applied) in total business R&D in the US fell from about 30 percent in 1985 to below 20 percent in 2015. Utilizing data on scientific publications, a study from Arora et al. shows that the number of publications per firm fell at a rate of 20% per decade from 1980 to 2006 for R&D performing American listed firms.13

The components of the US technology innovation flywheel are still here, and arguably more capable than ever, yet the ecosystem is no longer spinning. As the now famous apothegm goes, “We wanted flying cars, instead we got 140 characters.” But why?

Evidence pointing to a shift in the corporate innovation model is detailed in the data-driven synopsis published by Arora et al.13 The authors strongly insist that “research inside companies can only survive if insulated from the short-term performance requirements of business divisions. However, insulating research from business also has perils. Managers, haunted by the spectre of Xerox PARC and DuPont’s ‘Purity Hall’, fear creating research organizations disconnected from the main business of the company. Walking this tightrope has been extremely difficult. Greater product market competition, shorter technology life cycles, and more demanding investors have added to this challenge.” A prescient example is the relative failure of Uber’s autonomous driving division.14

Arora et al. suggest the “emergence of a new division of innovative labor, with universities focusing on research, large firms focusing on development and commercialization, and spinoffs, startups, and university technology licensing offices responsible for connecting the two.” Missing in this model is the coupling of R&D and productization, which is always non-trivial in deep tech and science.

A critical component is the mindset around value capture. Successful corporate labs are motivated to work on general purpose technologies broadly related to their industries; as leading companies in their markets, technologies that benefited their product space would benefit them the most. One could argue the AI labs within big tech maintain this mindset, such as Google and Microsoft; at the premier AI conference NeurIPS in 2019, Google (with DeepMind) led all institutions with 170 papers accepted, followed by MIT (86), Stanford (85), CMU (79), and Microsoft (76).15 That being said, the dismantling of the Twitter Cortex ambitious AI core a few years back is a counter example, as is the recent departure of world-class AI experts from Uber AI Labs.16,17

Organizations like DARPA are uniquely suited to tell an entire field “we don’t think you’re doing this right”, and then put their money where their mouth is.

Perhaps the most valuable component, however, does not necessarily show up on earnings reports and market forecasts. The successful large corporate labs from 30 years ago generated significant external benefits that are realized across the world today. That is, the exponential value of research is not captured by the host company, but benefits the broader economy and society. This is why US government science and technology agencies are in the game. Ambitious goals and doing the hard things keeps the ecosystem churning for future generations of science and tech advances. As suggested by a former DARPA Program Manager18, they quantify success not on balance sheets and market reports, but rather by the number of technology transitions.

With deep technical expertise and deeper pockets, organizations like DARPA and NASA are uniquely suited to tell an entire field “we don’t think you’re doing this right”, and then put their money where their mouth is. The DARPA Grand Challenge in 2003 was, by objective measures, a failure. Nonetheless they got up, dusted off (literally, all vehicles crashed on the Baja desert course), and ran the challenge again year after year. The exponential value generated by the DARPA Grand Challenge is perhaps intangible: producing and inspiring future generations of world-renowned engineers. The top two teams from the DARPA Grand Challenge, Carnegie Mellon (CMU) and Stanford, went on to produce a generation of brilliant engineers shaping the world today: for example, Sebastian Thrun (Founder of Kitty Hawk Corp and Udacity), Astro Teller (Captain of Moonshots at Google X), Chris Urmson (Founder of Waymo and Aurora), and thousands more like them. One of the Grand Challenge spearheads, Red Whittaker at CMU, went on to teach and inspire decades of robotics and computer science students in pursuit of the Google Lunar X-Prize19 (another literal moonshot challenge, 50 years after the original space race). No team made it to the moon, but the CMU project alone spun-off multiple deep-tech startups, and the team members have leading roles from NASA and Blue Origin to Amazon and Facebook.20

There is no US-China AI race, but rather the country positioning themselves for such a race is playing the wrong game. This is about AI for good, at a time when all countries across the world need it.

The space race of the 1960’s was a decade that would set the tone for a prime phase of American innovation: pursue moonshots, do the hard things. In 2020 we are again at such a pivotal time. Not because of yet another arms race: There is no US-China AI race, but rather the country positioning themselves for such a race is playing the wrong game.21 This is about AI for good, at a time when all countries across the world need it.

Now more than ever, AI techniques, massive amounts of scientific data, and space exploration can open a new frontier of technologies to assess climate change and drive climate resilience. Once again we look to kickstart the flywheel of innovation-days-past: multi-disciplinary collaborations backed by government and corporate research labs, advancing science not for profits but for the betterment of humankind. Initiatives like NASA’s Frontier Development Lab (FDL) apply AI and space technologies towards problems ranging from predicting climate change and improving disaster response, to studying planetary resources and astronaut health for extended space travel. FDL brings the brightest across industry and academia into a room to tackle grand challenges, just like interdisciplinary teams of scientists and engineers in the Apollo days.

FDL, like many institutions advancing AI and science, are strong advocates for open-source technologies. Bloom et al. declare that “exponential growth in research leads to exponential growth in [research expenditure]. And because of nonrivalry, this leads to exponential growth in per capita income.” One does not need to read between the lines to grok the implications here for open-source software and open, reproducible science. And beyond open-source, FDL is setting the example for multinational collaboration on AI for good. During summer 2020—with the support of NASA, the European Space Agency, Google, NVIDIA, MIT, the Mayo Clinic, and others—FDL “virtually” brought together nearly a hundred scientists and engineers across five continents to pursue a dozen ambitious projects. The teams produced AI systems that generate satellite images of future climate scenarios, predict satellite conflicts and collisions, understand the molecular basis of cancer in high radiation environments, and more.

This sounds eerily similar to ARPANET22, the foundation of the internet, which was an international collaboration with the US, UK, and France — not to mention a synergy of government programs with academic and industry R&D. Shortly after in 1990, the English computer scientist Tim Burners Lee23 invented the World Wide Web while working in Switzerland at CERN, a massive, international moonshot project in its own right.

At the moment, international AI and space tensions are high: China limiting its AI exports24, and Russia testing satellite warfare capabilities25. So far the US government is moving in a promising direction: NASA is seeking from Congress a $25.2B budget, a 12% increase that will likely be a boon for companies across the space industry. The White House Office of Science and Technology Policy calls for ~$1.5 billion in AI non-defense funding for 2021, a 54% jump from the prior fiscal year; notably, the Department of Agriculture plans to invest $112M in AI research, up from $4M in 2020.26 And depending where the chips fall this November, a new agency funding clean-tech, ARPA-C, may be on the horizon.27 The hope is these initiatives, just like the R&D labs and government moonshots of decades past, will lead to new industries and generations of ambitious scientists and engineers to advance humankind.

To close with a cliché: with the near- and long-term value of advances in artificial intelligence and space exploration, along with the burning need for climate science and technologies, the stars are aligning for the re-birth of the tech innovation flywheel. Or as the Frontier Development Lab puts it, ad astra per algorithmos.

Thank you James Parr for valuable discussion for this article.

Disclosure: I am an AI Advisor with the NASA Frontier Development Lab.

Fri Sep 4 , 2020
WASHINGTON (NEXSTAR) — School is already back in session around the country and Virginia Democratic Congressman Bobby Scott is again pressuring the Senate to take up the Heroes Act. “There are things that schools need to do to reopen safely,” Scott said. The $3 trillion COVID-19 relief bill passed the […] 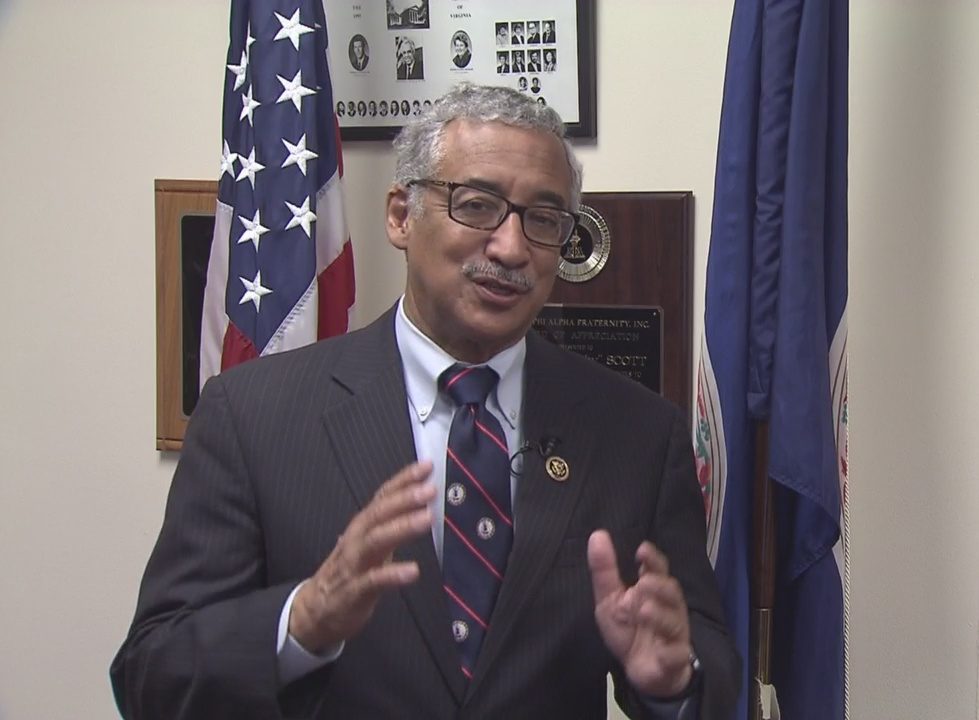